SRH could only manage to post 132 after being put to bat, courtesy Ankit Rajpoot.

Sunrisers Hyderabad (SRH) once again defended a low total and this time against the Kings XI Punjab (KXIP) in the match 25 of Vivo IPL 2018. SRH could only manage to post 132 after being put to bat, courtesy Ankit Rajpoot. Rajpoot took the first fifer for KXIP and finished with impressive figures 4-0-14-5. He went through SRH’s batting order picking up the wickets of Shikhar Dhawan, Kane Williamson, Wriddhiman Saha, Manish Pandey and Mohammad Nabi. Mujeeb Zadran was the only other bowler who had a wicket to his name.

KXIP mentor, Virender Shewag took on his twitter account to praise the team’s performance in the first half of the match. He even congratulated SRH team for winning the match.

Not the result we would have liked, but happy with the first half of the tournament.5 out of 7 we will take it. Have a week s break now. Congratulations @SunRisers on the victory & a great effort from young Ankit Rajpoot becoming the first Punjab bowler to take a 5-for #SRHvKXIP

Chris Gayle and KL Rahul provided KXIP with a good start building a partnership of 55 or the first wicket. It was Rashid Khan who got the first wicket of Rahul which opened the floodgates as KXIP lost the match by 13 runs. With the win SRH climbed up the points table chart with 10 points just below Chennai Super Kings (CSK) in terms of run rate. 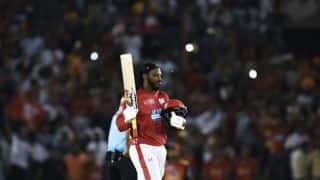