Ajinkya Rahane, Sanju Samson, Ben Stokes and Shreyas Gopal were the only players to get to double digit score.

Batting was not to perfection. Fielding was sloppy and bowling was erroneous. Rajasthan made a nightmarish comeback to the Indian T20 league on Monday when they played their first game against Hyderabad at Rajiv Gandhi Stadium. Rajasthan were sailing merrily till the Powerplay with the scoreboard reading 48 for 1. But the brakes applied by Hyderabad saw the game slipping from Rajasthan’s hand in no time. Barring Sanju Samson, none could withstand the Hyderabad bowling attack.

Rahane in his post-match conference rued lack of partnership: “I think first of all, we thought on this wicket, 150-160 would ve been an ideal total because the ball was doing a bit and the medium pacers had good help on this wicket. But we didn t get that one partnership. We lost crucial wickets in between. Getting a good start in the first six overs, that was the key, and we got that I always believed that it was a wicket where one big partnership or (if) one set batsman can bat through the innings that really would ve helped.”

With no Steven Smith in side, Rajasthan missed the firepower with the bat and as a captain. However, Rahane believes Rajasthan have enough big names in the side to help revive their fortunes. Rajasthan boasts of big-hitting batsmen like D’Arcy Short, Jos Buttler, Ben Stokes and Ben Laughlin, none fired at the need of the hour. Heinrich Klaasen was the new added member to the side who did not play the opening game.

“D Arcy Short did really well in the Big Bash, even for Australia recently, Jos Butler and Stokes we all know how dangerous they are, Ben Laughlin is an experienced bowler in T20 cricket and did well in the Big Bash in Australia. Klaasen is also there… He didn t get a game but he did well against us in South Africa in T20 cricket. Definitely Steven Smith is a quality player, but we are not thinking about him right now,” Rahane added. 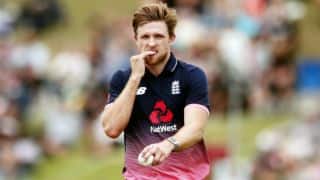