Bengaluru's Virat Kohli has two dependable spinners in Washington Sundar and Yuzvendra Chahal to bank upon in Indian T20 League 2018.

In Indian T20 League, Bengaluru have been known to be a batting-heavy force. Nonetheless, they haven’t won the title for once as of now. To find the right combination in their bowling arsenal, Bengaluru have this time got two of India’s best shorter-format spinners, at present, in the dugout Yuzvendra Chahal and Washington Sundar. Virat Kohli-led Bengaluru would hope to get their first trophy courtesy Chahal-Sundar’s combo.

Sundar, who had a pleasant run in March’s Nidahas Trophy 2018 in Sri Lanka, feels an off-spinner and leggie can be highly beneficial to a side. “I feel really happy to see the hard work and effort that I put in my preparation is paying off in the middle. Having an off-spinner and leg-spinner adds lot of potential to the side. I really wish Chahal and I come good for the franchise this time. We have an understanding. If one of us went for runs, the other tries to restrict the batsmen and we exchange notes in between overs too.”

Chahal, on the other hand, had words of praise for his counterpart. “Washington is a matured guy for his age. It s good to have someone who can bowl two-three overs in the Powerplay so that I can come in the middle overs in some matches or even both of us can bowl in tandem in Powerplay. That gives added option to the team.”

Washington had bowled 13 out of 20 overs in Nidahas Trophy, and yet managed to managed to choke the opposition and contain the run-flow considerably. A confident Washington wished to carry the momentum, but is aware that his tricks have been exposed and batsmen will come hard after him. “I less than I see it more as an opportunity rather than challenge (bowling in Powerplays) as once you succeed there it gives you a lot of confidence. With so many cameras all around these days, people get to know what you do from A to Z. But I feel it s not necessary to change the way you do certain things. What it important is not to be predictable and so the way you think has to be a bit different at this level of the game,” he added.

Sundar said, “The kind of cricket he (Virat) plays has inspired a lot of youngsters including me. I hope to grow under him.”

Chahal, before signing off, shared, “Virat helped me a lot both on and off the field. I was such a shy guy in front of the cameras. But he has given me lot of confidence that has helped my style of bowling.” 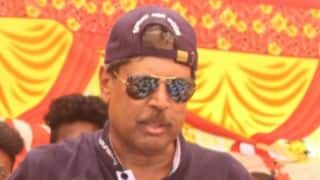