Shikhar Dhawan carried on the good work done by Hyderabad bowlers to take the home team past Rajasthan in their opening match of Indian T20 League 2018. Chasing a modest 126, Hyderabad didn’t break a sweat and cruised home with 25 balls to spare. Dhawan, in David Warner’s absence, led from the front with the willow and remained unbeaten on 77*. Thus, he know becomes the Orange Cup holder as well. The victory was nicely set up by Kane Williamson’s troops by virtue of their all-round efforts. Siddarth Kaul’s extra pace, Shakib Al Hasan’s accuracy, Rashid Khan’s spin and Billy Stanlake’s venomous pace made Hyderabad’s outing a memorable one on Monday.

In pursuit of 126, Hyderabad opened with Dhawan and Wriddhiman Saha. The wicketkeeper-batsman was given the licence to accelerate, and he began confidently. However, he was caught for a run-a-ball 5. From thereon, Hyderabad didn’t lose any further wicket to seal a thumping win. Williamson moved the scoreboard comfortably, and played some extravagant strokes. Dhawan, on the other hand, was batting without any difficulty. He lashed onto any width on offer and pulled with aplomb. He was quick on his feet and found the sweet part of the bat on most occasions.

Note: Dhawan was given a reprieve on 5 off Jaydev Unadkat. He danced down the track to a ball with extra bounce, and got a thick edge. Skipper Ajinkya Rahane, at slips, made a mess of it.

Earlier, Rajasthan began well after being invited to bat. They were 48 for 1 at end of first powerplay (6 overs). However, they lost plot from thereon. Their innings got no lift with Rahane (13), Stokes (5) and Jos Buttler (6) failing to deliver. Sanju Samson missed out on a fifty, and Rahul Tripathi got a start. From 92 for 3, Rajasthan reduced to 115 for 7 before managing only 125 for 9.

Williamson was splendid with his bowling changes and field settings. In addition, all the bowlers responded and were complimented by the fielders. 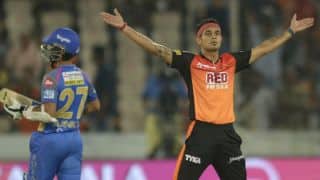 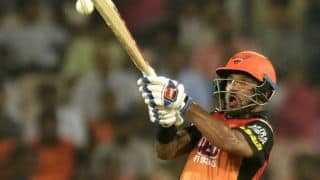