Mumbai won their third T20 league title by a run.

The Indian T20 league s 2017 final was a nail-biter. 130 was the target set by Mumbai for Pune. It was just a matter of a run that handed Mumbai their third title. The game boiled down to the penultimate over. 23 were needed of the final two overs.

Jasprit Bumrah was expected to be wrecker-in-chief. Steven Smith and Manoj Tiwary played cautiously taking singles before Smith took off and smashed a six over long-off. It came down to 11 off 6. Mitchell Johnson, Mumbai s veteran bowler after Malinga, was introduced into the attack.

Tiwary made the chase look easy with a boundary off the very first delivery. But the aftermath left the Pune dugout in a state of shock. Tiwary was dismissed the very next delivery and the equation then read 7 off 4. Johnson was on a hat-trick when he removed Smith. Mumbai were already celebrating as though they had lifted the trophy.

Johnson missed his hat-trick as Washington Sundar took a quick single. Christian took a couple in the next, leaving just 4 required from the final ball. And that urge to take quick runs saw Sundar and Christian caught in a mix-up, handing another title to Mumbai.

But the hero that day for Mumbai was Krunal Pandya. During Mumbai s innings, Krunal entered the crease when his side was tattering at 41 for 3. Krunal received no support from his partners and played a lone battle of 38-ball 47 to take Mumbai to sub-par total of 129.

In a quick chat with Mumbai channel, Krunal recollects those final moments and what was running through his mind: The scoreboard read 80 for 7. The first thing that came to mind at that time was that no matter what happens, I will not get out till the 19th or 20th over. When the 19 th over started, I said to myself that now I have to smash and it worked out. When I was taking the leg-stump guard, I kept telling myself we can t lose. I have to fight for the team.

No wonder Krunal considers that innings to be one of the best in the T20 league. 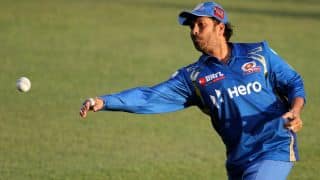