The second two-day warm-up game will be played at the Glenelg Oval in Adelaide on Thursday.

The Indians will face Cricket Australia XI (CA XI) in the second tour game, which will be played at Glenelg Oval on Thursday.  The first tour game, which was scheduled to take place on November 28, was abandoned due to Australian cricketer Phillip Hughes’ sudden demise. The Test series has also been reshuffled after Hughes ‘death as it was early for most of the Australian cricketers to play in the Test series after Hughes’ funeral which took place on Wednesday.

After a series of disheartening events, India will finally get another practice game before the first Test starts at Adelaide Oval from December 9.  The last practice game between Indians and CA XI, which was played at Gliderol Stadium in Adelaide, ended in a draw. After a gap of almost 10 days between the two warm-up games, India would look to push in all the resources one last time before the big tour commences in Adelaide.

Virat Kohli will lead the team once again in absence of MS Dhoni, who is scheduled to arrive in Adelaide on Friday. Kohli came good with the bat in the white uniform after a sour England tour, as he scored a brisk 60. Other than Kohli, three other Indian batsmen scripted their half-centuries. Ajinkya Rahane and Rohit Sharma, who came out to bat at No. 5 and 6 respectively, were dismissed cheaply. It would be another opportunity for both of them to present a case for berth in the Test team.

Shikhar Dhawan also fumbled to get going in first tour game will look to start with some runs this time. KL Rahul, who was drafted in the Indian squad, didn’t get a chance to bat in the first tour game. It is quite likely however, that he will get an opportunity to open. Rahul could cement a place in the Indian line-up if he manages to continue his sublime form which he displayed in the Duleep trophy.

Wriddhiman Saha was exquisite as he punched in with an unbeaten 56 with the bat, and is most likely to continue with behind the stumps.
On the bowling front, Varun Aaron garnered praises from almost everyone after he got good pace and bounce in the first tour game. It will be important for Aaron to carry on with the same intensity and not stretching too much before the long series. Rookie spinner, Karn Sharma raised eyebrows more with his batting than bowling in the last tour game will have another go with his wrist spin.

While on the other hand, it would be a difficult first outing for CA XI after the demise of Phillip Hughes. In the previous tour game, CA XI were bundled out for a below-par 219 with most contribution by the Indian pace bowlers. Almost three CA XI batsmen were dismissed on nought by in the first tour game. A fighting 40 by Harry Nielsen almost saved them from embarrassing score.

CA XI will again be led by Ashton Turner and would look to present an improved show before the senior team takes charge next week. 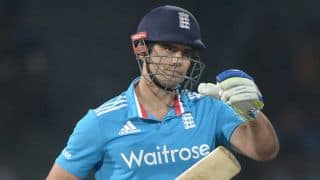