Indian bowlers have conceded 4,203 runs in the last 14 ODIs.

India‘s cherry-charmers have conceded far too many runs in the last few One-Day Internationals (ODIs), leaving the batsmen to chase tall scores. If India’s batsmen are not really having a great time in the middle, you could blame the bowlers for it. Not that the bowlers have to do the batsmen’s job. But the way MS Dhoni’s side has been doing is way below international standards, leaving the batsmen to chase big totals in difficult conditions.

Dhoni’s bowlers have conceded 4,203 runs in 14 ODI matches (starting from the home series against Australia till the second ODI in New Zealand), which is more than 300 per game. Either you blame it on the new ODI rules or the bowlers’ inability to contain the opponents for India’s defeats.

India’s most reliable bowler, Ravichandran Ashwin, has managed to take only 16 wickets in 14 games at an average of close to 46, with his best figures being two for 37. Ravindra Jadeja’s average of 44.43 looks better in comparison to Ashwin’s, with identical number of wickets.

Bhuvneshwar Kumar is also struggling to find a foothold, scalping only seven wickets in 11 matches.

Ishant Sharma has been the worst of the lot. In seven games, Sharma has eight wickets at an average close to 50. And with every match, the calls for him to be dropped are only rising.

However, the only positives that the Indian bowling has seen is the rise of Mohammad Shami. He has taken 27 wickets from 11 matches at 21.74, and with best figures of four for 55.

Pace guru TA Sekar defended the bowlers. “Cricket has always been a batsman’s game. With these new ICC rules of only four fielders outside the circle, it has become much easier for batsmen to score. So, he just needs to put the ball on top of the fielder and he gets a boundary. Also, people have started reading the spinners well and the grounds in New Zealand are smaller,” he said.

Sekar, however, was unhappy with Ishant and Jadeja. “Ishant has technical flaws. He needs to go back to the drawing board and work on his action, speed and accuracy. Jadeja, too, is going for a lot of runs. He can’t even turn the ball. Ashwin is bowling well but not getting wickets while Shami and Bhuvi are also doing well.” he said.

Sekar said the BCCI has to get into the root of the problem. “What are the coaches doing? What is the BCCI doing? Are they only interested in being the most powerful and rich nations and organise the Indian Premier League (IPL)? They have no coaches in their academies. They should work with ex-cricketers, have a conclave and come out with a solution” he said. 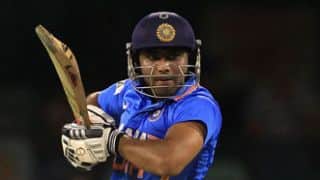 In Photos: India vs New Zealand, 3rd ODI at Auckland