Rahane was out for 1, edging seamer allrounder Jonathan Carter behind stumps to keeper-captain Jahmar Hamilton.

Vice-captain Ajinkya Rahane, who is on a tricky wicket with regards to his place in the Test XI, failed once again as India reached 89 for 3 against West Indies A at lunch on the opening day of their three-day warm-up game at Antigua on Saturday.

Rahane, who has been in wretched form for the past couple of years and also had a poor county stint with Hampshire, was out for 1, edging seamer allrounder Jonathan Carter behind stumps to keeper-captain Jahmar Hamilton.

The dogged Cheteshwar Pujara was batting on 16, having faced 51 balls alongside Rohit Sharma, who got a few crisp boundaries to remain unbeaten on 22 off 38 balls.

Earlier, KL Rahul looked fluent during his knock of 36 off 51 balls with five fours and a six but fellow opener Mayank Agarwal’s (12) defence was breached within the first hour.

Rahul looked good for a big one before being holed out to Romario Shehperd off new ball bowler Keon Harding’s bowling.

The talking point of Indian batting has been Rahane, who has gone without a hundred for the past two years. His last three-figure knock came against a below-par Sri Lanka side in August, 2017.

First the steps, then the view ??

Where does this stairway lead to? ?? pic.twitter.com/yUfU6SUbXA

In the last 12 Test matches, he has crossed half-century mark only five times in 20 innings. His place in the playing XI is not under threat at least for this two Test series but the same can’t be said for the home series against South Africa and Bangladesh at home if he happens to fail in the current series.

Our openers are off! #TeamIndia won the toss and will have a bat first against West Indies A ?? pic.twitter.com/uV0AUnzQGT

With Hanuma Vihari closing in on him and Shreyas Iyer waiting in the wings, it’s a tense time for the Indian vice-captain. 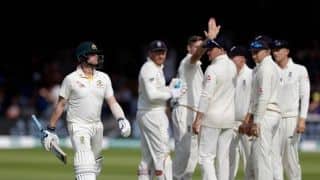