Shaun has backed the maiden Test call of Nathan Coulter-Nile.

Shaun Marsh is the only player in the chosen Australian Test side for Sri Lanka tour, who was in the squad when Australia toured Sri Lanka in 2011. Marsh, who was forced to leave Kings XI Punjab mid way of Indian Premier League (IPL) 2016 due to back injury, has admitted that he is not hundred per cent fit as of now. Marsh, who has not been picked for the tri-series against West Indies and South Africa, has time till July to recover for the Test series in Sri Lanka. “My back’s getting better, I wouldn’t say it’s one hundred per cent but I’ve got a bit of time up my sleeve now to get it right,” Senior Marsh said. READ: Australia announce squad for Test series against Sri Lanka

Shaun has backed the maiden Test call of Nathan Coulter-Nile especially after the fast bowler has fought a string on injuries over the past years with the most recent being a dislocated shoulder while fielding in the KFC Big Bash League that had ruined his hopes of a 2015 Boxing Day Test debut.

“Coults (Coulter-Nile) is firing, he’s been excellent over the last six months and he’s in a really good place with his cricket at the moment. Whenever he’s had a chance to play for Australia he’s done a really good job,” Shaun said.

“So I’m really excited to see Coults in the Test squad and I’m sure if he gets an opportunity over in Sri Lanka that he’ll do really well. “Considering that over there reverse swing will probably come into play at some stage, and he’s one of the best at it,” he added.

Virat Kohli, Anushka Sharma spotted together at Bengaluru ahead of Qualifier 1 of IPL 2016 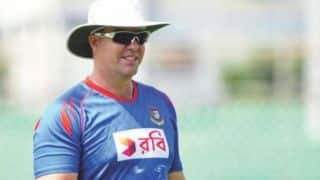