Glenn Maxwell had injured his right shoulder during the ODI series against England.

Glenn Maxwell is clawing his way back to fitness ahead of Australia‘s tour of UAE to play Pakistan. He had injured his right shoulder joint injury during the ODI series this England. “There was a lot of fluid built up around the bursa, and that was pinching,” he told cricket.com.au. “My range of movement was restricted quite a bit; it still is a little bit. I can’t reach fully above my head consistently. Every now and then it just pinches.

“I was able to get through with the T20 series in Zimbabwe [after England] and just find a way to throw comfortably, and by the end of that series I felt like I was throwing really well. But once I got home it was about making sure I could sustain it for the rest of my career. That’s what this period is about now.”

Maxwell and Shaun Marsh have been left out of the Australia A squad due to tour India, which probably means they are contenders for the Test squad in the absence of the suspended trio of Steven Smith, David Warner, and Cameron Bancroft.

Maxwell himself, however, does not sound too confident: “As far as UAE is concerned, you can’t really count on selection. “You’ve just got to basically get yourself ready for what is in the foreseeable future. If selection goes my way I really hope it does I’ll be ready for that.”

Maxwell, 29, has played 7 Tests (all of them in Asia) for his 339 runs at 26.07 and 8 wickets at 42.62. He did attend Victoria’s three-day training camp at the HMAS Cerberus Naval Base this week, though his physical activities were restricted. 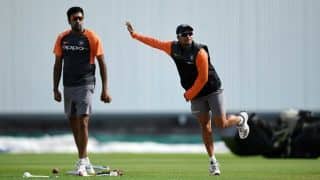