Pakistan who resumed Day 2 at 255 for 8, were bowled out for 281 with Alzzari Joseph completing the task on Day 2 at Sharjah Cricket Stadium on Monday. Gabriel started off Day 2 with the new ball, he tried bowling round the wicket but was unlucky to get any wicket instantly. Aamer and Yasir got few boundaries early on in the day and was off to perfect start, spoiling the plans of West Indies to bowl them out. After series of boundaries, Alzzari Jospeh gets the first wicket and an inside edge removes off Aamer for 20. Zulfiqar Babar was the 11th man joining along with Yasir in the centre. With the way Pakistan were moving, a 300-run mark was expected. But not all went well for the Pakistan as Joseph completed the task that Gabriel and Bishoo were struggling initially, grabbing the last wicket of Yasir in similar fashion of Aamer. FULL CRICKET SCORECARD: Pakistan vs West Indies, 2nd Test at Abu Dhabi

Pakistan had perfect start to their innings as they were cruising at 230 for 4 on Day 1. West Indies, however, found means to spoil the plans and took quick four wickets to keep the hosts on backfoot. Sami Aslam was at the top with his blistering half-century. Azhar Ali who got a triple century on his first Test failed to provide any impetus and was gone for golden duck. Asad Shafiq was also gone for duck and was not looking forward to this beginning for his side. Ahmed and Misbah added good steady partnership, when the wickets were tumbling of 80 runs and provided some push for Pakistan. Misbah had started his record 49th Test as captain — bettering Imran Khan’s feat of 48 Tests as captain — on a good note when he won the third straight toss and instantly decided to bat, but his batsmen played reckless shots.

On Day 1, Leg-spinner Bishoo and fast bowler Gabriel shared seven wickets between them to stop Pakistan from posting a big total on Sunday. Pakistan were cruising along nicely at 230 for four when West Indies grabbed four quick wickets to put Pakistan on the back foot at 255 for eight by close of play at the Sharjah stadium. At close tail-enders, Aamer was batting on six and Yasir on one as West Indies will look to bowl out Pakistan early on day two. Pakistan, who won a good toss on a batting-friendly pitch, saw Misbah-ul-Haq scored 53, Younis Khan scored 51 and Sarfraz Ahmed who scored 51 all failed to build on good starts.

Earlier, it was Gabriel who jolted the Pakistan innings at the start with the wickets of Ali and Shafiq in the very first over of the match. Ali edged a lifting delivery from Gabriel to slip after Sami had taken a single off the first ball. Shafiq also survived just one delivery before being trapped lbw by that time Holder successfully challenged Reiffel s not out decision.

At the toss, Pakistan brought back pacemen Aamer and Wahab Riaz rested for the second Test in place of Sohail Khan and Rahat Ali. West Indies also made two changes from the Abu Dhabi Test, with fit-again wicketkeeper Shane Dowrich replacing Shai Hope and paceman Joseph coming in for Miguel Cummins. 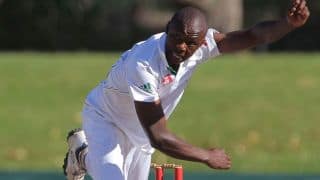