Australia's Tim May, ousted from an International Cricket Council panel amid allegations of pressure from India, says it is time someone "stood up to the cancer of stand-over tactics" that define the governing body. 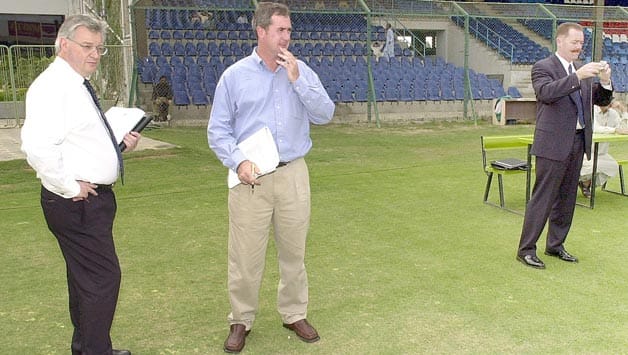 Australia’s Tim May, ousted from an International Cricket Council panel amid allegations of pressure from India, says it is time someone “stood up to the cancer of stand-over tactics” that define the governing body.

May, chief executive of The Federation of International Cricketers’ Associations (FICA), was recently replaced as a players’ representative on the ICC cricket committee by India’s Laxman Sivaramakrishnan.

FICA this week called on the ICC to investigate charges of ballot “fixing” after the former Indian leg-spinner was elected to the committee amid accusations that voters had been put under pressure.

FICA, which has no Indian affiliate as there is no Indian players’ union, has claimed what was, in effect, a run-off between May and Sivamarakrishnan was not conducted fairly, with some national boards exerting undue pressure on their captains to back the Indian.

May said in a report Thursday he would not comment on the specifics of his non-election because he has a vested interest, but he pointed to the ICC’s failure to enforce its own standards of governance.

“The only thing that I can say and reinforce is that this issue isn’t about whether Siva or I got elected or not but it’s about was the process compromised?” the former Australian off-spinner told Fairfax newspapers.
“Did Boards interfere and make threats to captains to change their votes?

May said FICA wanted the ICC to police their own processes and not turn their back on it.

“It’s time someone stood up to this cancer of stand-over tactics that defines the ICC these days,” May said.

May has challenged all national cricket boards on issues ranging from tour scheduling to the Woolf report, which tried to revamp ICC governance but was rejected by India, Fairfax newspapers said.
The ICC cricket committee makes recommendations on issues including the umpire Decision Review System (DRS), which May has pushed to be used in all international series.

Opposition from the powerful Board of Control for Cricket in India (BCCI) means it is not used in contests involving India.

May has said that while he supports some aspects of the BCCI, “there are other aspects that concern me and others”.

However, some argue it is naive to expect India to produce so much of the game’s cash and not have equivalent influence in cricket’s corridors of power.

May said FICA will discuss its response to the ICC committee vote at its annual general meeting in the United States later this month.

Paul Marsh, chief of the Australian Cricketers’ Association, said all boards were equally guilty because of their reluctance to stand up to the BCCI.

“The reality is the boards can’t see past the next India tour that might be in jeopardy because they say something — there are constant threats of that sort of stuff,” Marsh told Fairfax newspapers.