INTERVIEW | Would Love to be Part of Mumbai Indians: Ex-Mumbai U-16 Captain Pushkar Sharma

INTERVIEW | Would Love to be Part of Mumbai Indians: Ex-Mumbai U-16 Captain Pushkar Sharma

Pushkar Sharma, who was Prithvi Shaw's captain during his U16 days, wants to make it to an IPL team in the upcoming Mega Auctions.

New Delhi: With dreams of making it in the Indian Premier League, the former Mumbai U-16 captain Pushkar Sharma was forced to stop playing cricket for a while and take up a job due to an unforeseen event in the family. But now that he has ridden the storm, the 20-year-old has started playing the game once again with an eye to be among the pool of players to go under the hammer in the upcoming Indian Premier League mega-auctions in 2022.

In a freewheeling chat with Ankit Banerjee of CricketCountry, Pushkar Sharma spoke at length about what inspired him to take up the sport, his favourite player, IPL dream and much more…

How did you take to the sport? What was the influence?

In 2007, during the T20 World Cup, everyone in the house was glued to the TV watching the match. And after India won, there were huge celebrations. The euphoria and happiness that I saw in my family for the sport inspired me to take to cricket.

You were an ex-Mumbai U16 captain, what happened to your rise, where did things get derailed?

It was an unforeseen event that took place in my family that forced me to stop cricket for a while and take up a job. I had to do a job as I was the only breadwinner in the family. While doing a job, I still continued to play the game, but could not take it to the next level and feel missed out.

Who has been the biggest inspiration in your life as a cricketer?

Being a left-hander myself, I have always looked up to Gautam Gambhir. His style, aggression, and ability to needle gaps and score at a decent pace have always inspired me. Watching him bat has helped me develop my game.

Do you have your eyes set on the IPL?

Which upcoming cricketer does not want to play the IPL? I too want to and I am working towards it by scoring runs anywhere I get an opportunity to play. I would like to make it to an IPL franchise in the upcoming 2022 IPL Mega auction.

Any specific franchise you want to be a part of?

Mumbai Indians of course. But that does not mean, I have a problem playing for other teams. For me, it is about performing with whatever opportunities I get. Being an opener, that too from India should help in the selection.

You hail from Mumbai, have you met Rohit Sharma, or what was the talk around him during your growing up years?

Wherever we played in Mumbai, people used to say, “yahaan Rohit itna maara hai, tum bhi maar sakte ho’. These things were said by many Mumbai-based coaches while we were growing up. That worked as an inspiration.

Do you get inspired by Virat Kohli?

Who doesn’t? I got the chance to see Kohli from close quarters at the BKC ground in Mumbai. We were far away from him and while the other India cricketers were having a knock or rolling their arms over in the nets, Kohli was busy working on his fitness under the sun and he did it for two straight hours. That was extremely motivating.

Pressures of playing for Mumbai…

Pressure is always there as with Mumbai the expectations are high. For me, meditation during tough times helped me a lot to stay calm and focused.

There is a massive difference and it is bound to be that. But yes, Kenyan cricket is on the right track, and in the near future, a few good cricketers are expected to emerge from the country that will make a mark in world cricket.

Your bond with Prithvi Shaw…

He is extremely talented and we knew about this very early. I share a good bond with him. When I was his U-16 Mumbai captain, we used to share ideas and both looked to help each other excel.

Keep watching this space for more interviews and videos. 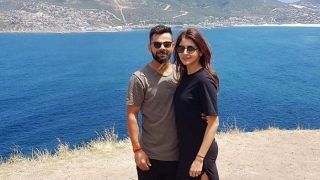