Pune registered six wickets win over Deccan reaching 137 in 18.2 over in their Indian Premier League match at the Rajiv Gandhi International Stadium in Hyderabad. 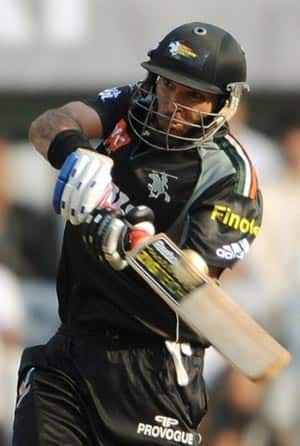 Pune registered six wickets win over Deccan reaching 137 in 18.2 over in their Indian Premier League match at the Rajiv Gandhi International Stadium in Hyderabad.

The host almost had whiff at victory when Daniel Christian struck a vital blow to send back Yuvraj Singh just when the Pune were inching closer to victory. Yuvraj tried to play across and had his wickets castled. Pune require 17 more off 21 deliveries.

Yuvraj and Sourav Ganguly tried to stabilise the Pune innings. Ganguly got down the pitch to loft Amit Mishra for six over deep-midwicket after the leggie had dismissed danger man Manish Pandey and Daniel Christian had Robin Uthappa caught behind for one.

Pandey looked dangerous as he hit Deccan bowlers all over the park. Earlier, Pragyan Ojha struck to dismiss danger man Jesse Ryder to stem the Pune run flow after the openers had made their intent clear coming heavily on the Deccan pacers to get their team off to flyer in pursuit of 137. The left arm spinner had Ryder bowled as he tried to play one across the line. The Kiwi had started the innings hitting two boundaries and a six in the first over of Dale Steyn and then followed it with two boundaries of Ishant Sharma in the very next over. Manish Pandey took time to get in before smashing boundaries apiece of Pragyan Ojha and Daniel Christian. Ryder continued his onslaught clattering a six three over into the match.

Ganguly to play as Deccan win toss, elect to bat against Pune