His blistering 23-ball 59 formed the the cornerstone for Royal Challengers Bangalore's easy win, but A B de Villiers, in a nice gesture, shared his Man-of-the-Match award with K P Appanna, who turned in an impressive performance with the ball. 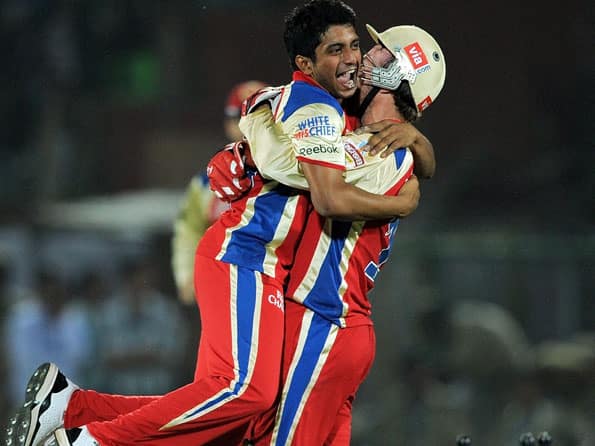 His blistering 23-ball 59 formed the the cornerstone for Royal Challengers Bangalore’s easy win, but AB de Villiers, in a nice gesture, shared his Man-of-the-Match award with K P Appanna, who turned in an impressive performance with the ball.

“I had a good game, I enjoyed my batting. I’d like to hand over this award to the man who took four wickets, KP Appanna. I haven’t done this before. It’s a team game,” de Villiers said.

“He (Appanna) took four wickets and it doesn’t happen everytime… that should be the Man-of-the-Match award.”

Appanna thanked the batsmen for posting a solid total.

“On this track, getting to 190 was a great effort, and I got some turn from the track,” Appanna said.

“He has come back after playing in one match and offers us a lot more options. Today he has showed what he is capable of,” Vettori said.

“The way Zak (Zaheer Khan), Vinay (Kumar) and Harshal Patel (bowled) was a confidence booster for the side.”

The Kiwi thought the tournament is wide open at this stage. “It’s an exciting tournament. Pretty much every team still has a chance, so we need to keep winning.”

Dravid was worried about their performance at the death.

“The death bowling has been an area of concern. I am hitting some good shots but its important to get the right result as well. Appanna bowled well, he had the backing of a lot of runs behind him. He spun the ball, it’s good for his confidence.” (PTI)