He is out with an injury but Adam Gilchrist played the role of a mentor to perfection when he lavished praise on Piyush Chawla who leaked 27 runs in the 19th over to pave the way for Mumbai Indian's win. 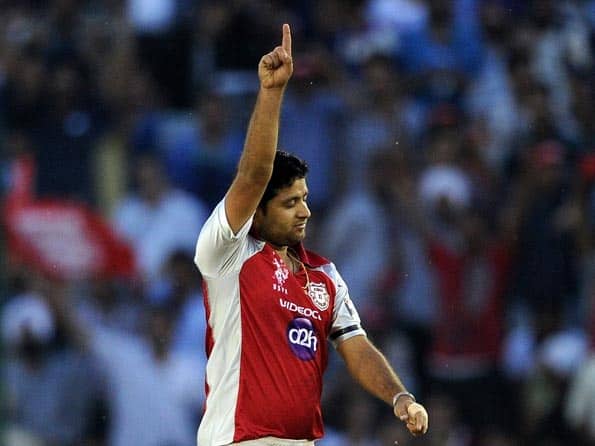 He is out with an injury but Adam Gilchrist played the role of a mentor to perfection when he lavished praise on Piyush Chawla who leaked 27 runs in the 19th over to pave the way for Mumbai Indian’s win.

Instead of blaming Chawla, Gilchrist decided to praise Robin Peterson whose innovative switch hits got MI back in the game.

“I think we should celebrate positive cricket played by Peterson,” Gilchrist, who is currently out with a hamstring injury, told reporters after the match.

“A reverse sweep, switch hit, slog to the boundary,” he said about Peterson’s batting in Chawla’s over.

Chasing 169 to win in 20 overs, MI surpassed the target leaving a ball to spare.

Defending stand-in captain David Hussey’s decision to use Chawla in the 19th over, Gilchrist said he bowled very well in the first three overs.

“When you are in an important situation, I am sure every captain will go to his best bowlers,” he said.

Gilchrist said that Chawla was disappointed and he had a chat with him.

“He has a good record in the tournament and I told him he needs to look ahead,” he said.

He also said that Hussey has captained well in the previous few matches in his absence. Gilchrist while responding to a question said no total can be safe the way T20s are played these days.

“No situation is lost until the last ball has been bowled,” he said.

Medium pacer Parvinder Awana, who had brought Punjab back in the hunt taking two crucial wickets in the 18th over including that of Rohit Sharma, also earned praise from Gilchrist.

“He has brought a real breath of fresh air with his bowling,” he said.

MI’s Ambati Rayudu (34 no) and Robin Peterson (17 no) creamed leg-spinner Piyush Chawla for 27 runs in the penultimate over to snatch a stunning four-wicket victory from the jaws of defeat against Kings XI.

Peterson and Rayudu helped the visitors chase the 169-run target with one ball to spare.

In a separate interaction with reporters, left-arm spinner Peterson said the victory would work a kind of catalyst for them in the matches up ahead.

“Well, you back each other when you are under pressure.

It could be a catalyst, but there is still a long way to go,” he said.

He said MI bowlers did exceptionally well and the team was confident of chasing down the total. He gave credit to Rohit Sharma and Rayudu, who batted sensibly to guide his side to victory.

Asked if he had found himself under similar situations, Peterson said that he has done it before, although not on a scale as big as mega event of IPL.

On skipper Harbhajan’s poor form in the tournament, he said sometimes it happens after you do all the work hard the luck does not favour you.

“He is a fantastic leader,” he said about Harbhajan.

Asked why he was taken off after he had conceded just three runs in his first over, he said the captain decided to bowl James Franklin and he took crucial wicket of Shaun Marsh.

Franklin also bowled just one over conceding five runs and was among the seven bowlers used by Harbhajan. (PTI)

J&K government hopes to prepare team to compete in IPL