Already mired in controversies, the Indian Premie League was on Friday rocked by a fresh scandal when Royal Challengers Bangalore (RCB) player Luke Pomersbach was arrested for allegedly molesting an American woman and severely beating up her fiance. 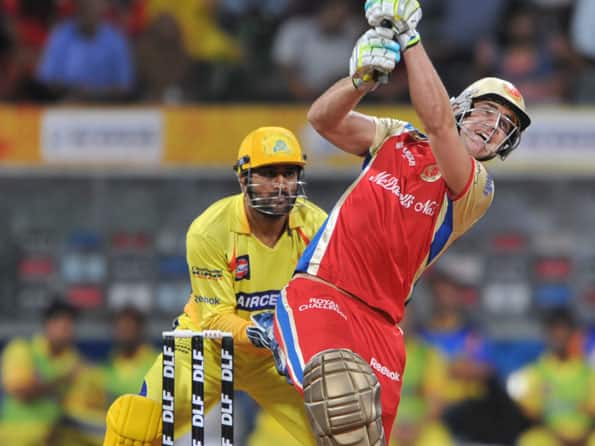 Already mired in controversies, the Indian Premie League was on Friday rocked by a fresh scandal when Royal Challengers Bangalore (RCB) player Luke Pomersbach was arrested for allegedly molesting an American woman and severely beating up her fiance.

The 27-year-old Pomersbach’s conduct prompted RCB owner Vijay Mallya to suspend the batsman, who has not played a single IPL match so far this season, till the time he is cleared of the charges.

The incident came two days after Shah Rukh Khan’s scuffle with officials of the Maharashtra Cricket Association officials, which has prompted MCA to ban the Kolkata Knight Riders co-owner and Bollywood star from its premises for five years.

The Australian player allegedly misbehaved with the woman, a US citizen, at a five-star hotel here early this morning and has been arrested, the police said.

A case has been registered against him under various sections of IPC including section 354 of IPC (outraging modesty of woman), 323 (hurt), 454 (house trespass) and 511 (Punishment for attempting to commit offences punishable with imprisonment for life or other imprisonment).

The victim claimed that the player invited himself for some drinks with the couple and some common friends from Mumbai in their room.

She left the men alone and went to her bedroom for catching some sleep but Luke followed her and misbehaved with her. “He tried to pull my hair and kiss me,” she alleged.

When her fiance intervened, Luke allegedly beat him up, she said.

The woman’s fiance has been admitted to a hospital where a CT scan has been done, doctors attending to him said.

The woman claimed that pressure is being mounted on her to withdraw the case but she will not do so.

“The RCB is aware of the incident involving one of our players. RCB will offer full cooperation to the authorities.

Till the time he is cleared, Luke Pomersbach will not be part of RCB,” RCB owner Vijay Mallya told reporters.

IPL authorities sought to distance themselves from the incident with Chairman Rajiv Shukla saying the event had nothing to with this because the it did not happen in any party organised by it.

“Let the law take its course,” he said.

However, BJP MP and former cricketer Kirti Azad alleged that the IPL “has given rise to many unsavoury things. Today’s attempt to rape is one such (incident)”.

He said foreign players were taking advantage of the conditions here.

The victim said, “I am not sure about his (player’s) full name. But he tagged along with us after the party and (insisted) that we have few drinks with him. He told something to my fiance and I did not like.”

“Then we left for our room and we thought he had gone to his room but he came upstairs tagging along with us. He asked us to help him around and telling my fiance that lets go and have drinks,” she said.

“There were no official parties in IPL 4 and 5. So the incident was not connected with an official IPL party. It was an individual misbehaviour of an individual player,” he told reporters.

“We have done away with official parties. So if some individual player does something in his individual capacity in a hotel, IPL has nothing to do with it,” Shukla added.

Asked what the IPL or the Cricket Board would do now as the player has now been arrested by the Delhi police, Shukla said, “Let the police deal with it first, do their business.

It is a police case and we will wait for the police report.”

Pomersbach, who made his international debut when he was called into Australia’s Twenty20 side in Perth in December 2007, has a history of misbehaviour under the influence of alcohol.

In 2009, after two hit-and-run incidents, Pomersbach was arrested and charged by police for driving with a blood alcohol level in excess of permissible limits, failing to stop and accompany police and escaping legal custody.

He pleaded guilty and was fined and had his driver’s license cancelled. The Western Australian Cricket Association suspended him indefinitely. He returned from his ban in January 2010.

Pomersbach also played for Kings XI Punjab in the IPL in 2008-09 season and made 152 in five innings, only once being dismissed.

The Royal Challengers Bangalore management have not given any reaction to the incident yet. The team is scheduled to leave for Hyderabad where they will play their next match against Deccan Chargers on Sunday.

The ongoing IPL has seen one controversy after another unfolding in recent weeks. Last week, a TV sting operation had implicated five fringe players in spot-fixing before Shah Rukh Khan’s scuffle with MCA officials hit the headlines.

Dr D K Baluja of Primus Hospital, where the victim’s fiance has been admitted, said there was bleeding from his left year and he was in drowsy condition.

“The vital parameters of the patient — blood pressure, pulse, oxygen level in blood, cardiac and abdominal condition — were all normal.

“Since the patient complained of delusion and there was injury to the ear, a CT scan was done immediately and the report said that there was no deep head injury,” he said.

He said the condition of the patient is stable. (PTI)

Chanderpaul should emulate Dravid and put team above self