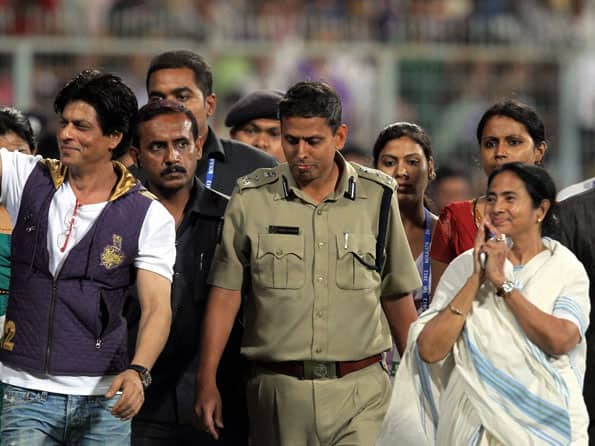 Mamata Banerjee (R) arrived at the stadium at around 8.30pm PTI

Mamata’s predecessor, Buddhadeb Bhattacharjee, never liked the commercialisation of cricket and always refused to visit Eden Gardens during IPL matches when he was in charge of the state but Mamta, better known as ‘Didi’, had her way.

Mamata arrived at the stadium at around 8.30pm after the rains relented, and met team principal owner Shah Rukh Khan.

Mamata and Shah Rukh, who signed up a deal with the state to be the brand ambassador of a soon-to-be-launched film city, made a round of the jampacked stadium and waved at the fans.

Earlier, Shah Rukh was given a grand welcome by nearly 50,000 spectators who braved heavy rains and sat patiently for the start of the match.

As soon as the film star entered the stadium, the crowd burst in loud chants of of “Shah Rukh, Shah Rukh” and waved frantically at him.

Shah Rukh was quick to reciprocate the gesture, waving at the boisterous crowd with flying kisses.

He also met several children and signed autographs for them.

Earlier, the Knight Riders organised a 30-minute opening ceremony giving it a local touch with traditional Chhau dance, Dhakis and a performance by a local band.

Six performers in KKR colours made an entry into the stadium in six Gerbil balls as they danced inside the giant transparent balloons to the tune of ‘Korbo Lorbo Jitbo Re’.

Electrifying chhau dancers had put up a performance of Goddess Durga vanquishing the demon which was followed by performances from traditional drummers (dhakis).

Saree-clad cheergirls then danced to the tunes of Rabindra Sangeet to mark the last part of the brief opening ceremony. (PTI)