India s vice-captain Virat Kohli feels players do not get affected by cheerleaders in Indian Premier League which has created a debate everywhere. 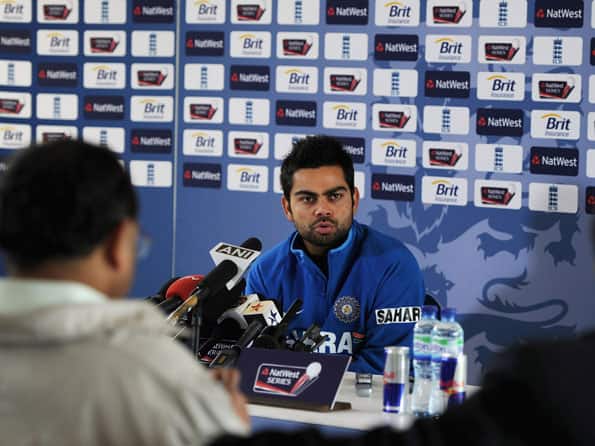 India s vice-captain Virat Kohli feels players do not get affected by cheerleaders in Indian Premier League which has created a debate everywhere.

“I don’t think as players, it affects us too much – you’re so involved on the field that you’re not bothered about what’s happening outside. I think it’s more to do with the whole package and the entertainment thing – for the crowd coming in, it’s fine as long as you have music. They’re cheerleaders, they’re not like… bad girls, or girls who’re showing off too much. They’re professional dancers, their job is to dance, they entertain people. You have people dancing in shows as well, so I don’t think there’s anything wrong with it as long as people are getting entertained.”

Kohli added, “I don’t get distracted, personally. In T20, you don’t have time to get distracted – it’s so quick, you have to run around in the field, and while batting, you don’t actually think about anything else. I don’t think it distracts us at all. “

Kohli preferred not stating about the off the field events, where cricketers are most found getting involved with cheerleaders.

” If people are getting distracted (on the field) that’s their own mistake I guess, they’re probably not concentrating too well. I’ve heard of a few times… that came on Twitter and all, like last IPL – that was sort of a bad incident, as far as this cheerleader thing was concerned, but I don’t think there’s anything wrong with it otherwise.”

Kohli, who has been girls favourite cricketer, doesn t have time for girlfriend.

“Time nahin hai. Honestly. Kya fayda hai – to be with someone, you need time. Ghar pe aane ka time hi nahin milta hai, we stay in the same city for barely a week, we’re touring for months. So there’s no point being with someone. I’m at home two-three months in one year, combined. We’ll get a break after the IPL – that’s the only break I’ll see in four years,” Kohli was quoted as saying in the Times of India.

Kohli didn t watch the Indian Premier League opening ceremony as he was busy shooting for a commercial in Mumbai.

” That’s what – when I get time off from cricket, I’m shooting most of the time,” he clarifies.

Kohli has been lucky when it came project an image that portrays him.

“I’ve been lucky – all the ads I’ve got, I’ve got to be myself. I haven’t had to act too much or tried too hard to be someone I’m not. I think that’s why people sort of like them. Even the Fastrack ads I did with Genelia. A bit of controversy also came in, but I think that’s a part of it.”

Kohli said it is more about the connection with the brand which connects the people.

“It was more of the connection with the brand – it’s edgy, it connects with the youth. If I’m a cricketer and Genelia’s an actress… If they see something that’s wanting to connect to the youth (sic), obviously they’ll like that. I think you’ve got to be yourself. If someone’s trying to portray that he’s a nice boy and trying too hard to prove that point, I think it shows to other people watching. See I’m not a nerd, obviously. Do I look like one? I’m not someone who sits at home and doesn’t like to go out, doesn’t like to watch movies. I like to live my life. I’m turning 24 this year. If I don’t live my life now, when else will I? I hardly get time off the field, so when I do, I enjoy it with my friends, hang out, watch movies, do what 23-year-olds do. I’m not a nerd, don’t plan to be a nerd and read books – which I can’t do at all (laughs)! So I like to be myself,” Kohli concluded.