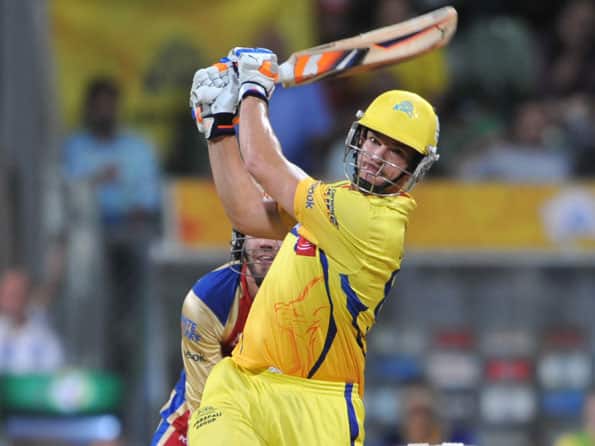 With all-rounder Albie Morkel back from South Africa after a sudden short trip last week, CSK will look to use him against a stronger RCB AFP

With three wins on the trot – two away and one at home – an upbeat Royal Challengers Bangalore (RCB) will take on defending champions Chennai Super Kings (CSK) in the Indian Premier League (IPL) at the Chinnaswamy stadium on Wednesday.

Though both the teams are tied at fifth and sixth place, with CSK a notch higher on better (+0.033) net run rate (NRR) vis- -vis RCB’s -0.192 NRR from seven games, with four wins and three defeats respectively, two-time runners-up RCB hopes to maintain its winning spree by avenging their defeat in Chennai April 12 by five wickets in a high-scoring tie.

Fresh from its 46-run emphatic victory over Rajasthan Royals (RR) late on Monday despite losing early their explosive batter Chris Gayle for four, the hosts are likely to retain the same team, as their star batsmen Tilakaratne Dilshan and wicket-keeper AB de Villiers set an imposing target of 190 with a unbeaten 122-run fourth wicket partnership.

Even left-arm spinner K.P. Appanna appears to have ensured his berth in the final 11 by demolishing the top order of RR with four wickets for 19 runs. The local lad played against Pune Warriors April 17 here but went wicketless for 23 runs in two overs.

As the tired home team landed from Jaipur later in the day, it preferred to rest than net practice ahead of the crucial match.

Though Virat Kohli’s inconsistent form continues to cause concern, the RCB management is unwilling to drop him as he was asked to open the innings against RR late Monday when Gayle was not fully fit to do the honours.

After winning their first league match against Delhi Daredevils by 20 run April 7 here, the hosts lost to Kolkata Knight Riders (KKR) by 42 runs here April 10, to CSK by five wickets in Chennai April 12 and to RR here by 59 runs April 15 on trot, but went to on beat Pune Warriors here April 17 by six wickets, Kings XI Punjab at Mohali April 21 by five wickets.

A confident CSK, led by its captain Mahendra Singh Dhoni, however, had a gruelling session at the nets in the stadium on a hot and humid evening to get a feel of the ground.

With all-rounder Albie Morkel back from South Africa after a sudden short trip last week, CSK has decided to play him against a stronger RCB.

IPL 2012: Sachin praises youngsters for not giving up in crunch situation