Mamata Banerjee called for reconsideration of the decision to ban Shah Rukh Khan, who is the co-owner of Kolkata Knight Riders and brand ambassador of West Bengal, from entering the Wankhede Stadium for five years. 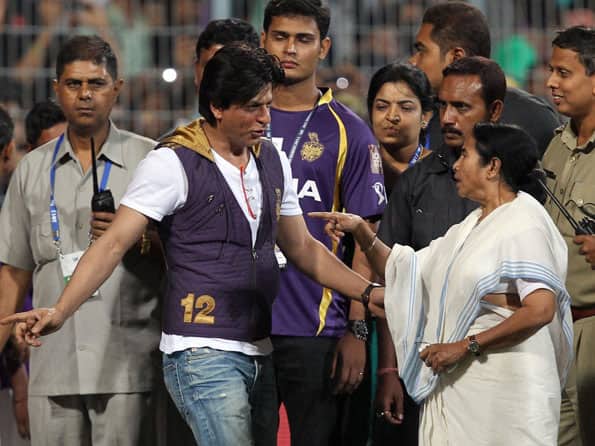 Mamata Banerjee called for reconsideration of the decision to ban Shah Rukh Khan, who is the co-owner of Kolkata Knight Riders and brand ambassador of West Bengal, from entering the Wankhede Stadium for five years.

The West Bengal Chief Minister said the ban on SRK from entering the Wankhede stadium was “undemocratic” and a “minor” matter had been blown out of proportion.

“It is undemocratic and unwarranted. I will appeal please reconsider the decision,” Banerjee said when reporters sought her reaction on the decision of the Mumbai Cricket Association.

“I think that harsh punishment has been meted out for a minor offence. The game should be taken as a game only. I am speaking not as a chief minister, but as a commoner,” she said.

“This incident has been blown out of proportion. I think all the people of Maharashtra don’t accept this decision on Shah Rukh Khan who, in the past, has also been heckled abroad.

“I was not at the spot, but what I watched or heard from TV, it is not a big issue. This is a small incident,” the chief minister said.

She said Shah Rukh accompanied some children inside the ground, including his child, that night. “Two or three policemen jostled with the children and he protested”.

The chief minister alleged that some political parties were trying to exaggerate the incident. “I will like to ask them not to play with fire.”

Asked if she would talk to her Maharashtra counterpart, the chief minister retorted, “I will not inform you what I will do. I came only to express my views to you.”

“We love Maharashtra, capital of Indian business. We love Shah Rukh, Sachin, everybody. They are our pride. Shah Rukh is our brand ambassador and that is why you are asking me the question,” she said