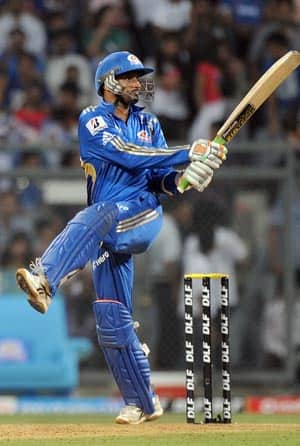 Harbhajan Singh top-scored with 33, as his side was bundled out for mere 92 runs on Monday night AFP

Mumbai were shot out by Delhi for a mere 92 runs and the visitors overhauled the target with 31 balls to spare to register a seven-wicket win and Harbhajan laid the blame on the poor show by his top-order batsmen.

It was difficult for us to score runs as we continued losing wickets. We lost Dinesh Karthik early on. (Openers) Davy Jacobs and (Richard) Levi did not give us the start we were looking for. Rohit (Sharma) was looking good, but unfortunately he also got out. We were not able to rotate the strike and also giving away wickets. That was the turning point in the game,” he explained.

The home team, put into bat, slumped to five for two in 3.1 overs and then slid further into the hole to be 44 for six after 10.2 overs before recovering a bit. But the final tally on a good, bouncy Wankhede Stadium track was well below par for the course.

Harbhajan, who top-scored with 33 from 22 balls, stopped short of calling it reckless batting even though poor shots were played and also a foolish attempt for a non-existent run led to Ambati Rayudu’s dismissal.

“What do you mean by that (reckless batting)?” he shot back.

“Rohit was batting well, unfortunately he got out to a ball which is supposed to go for four. Anyway I think he’s been doing great for the team. Rayudu got run out, Apart from that the first two wickets were important,” Harbhajan said.

“We have to put some runs in the first six overs. If we get a good start then any team can get 160-170. This is a kind of wicket where if you get a good start you can put runs on the board. It didn’t happen to us and we have to look at the options,” he added.

Harbhajan praised Shahbaz Nadeem for his bowling during powerplay overs, but insisted that the Delhi left-arm spinner did not do anything extraordinary by way of getting turn or beating the batsmen in flight.

“Of course we let him bowl those three overs. We played rash shots against him. It wasn’t something special he did, he was not spinning the ball much nor the flight trajectory was really great.

“Still you need to have a big heart to bowl in powerplay and he did a tremendous job for Delhi. But I think we should take the blame for not batting well against him. I don’t think he bowled any special, but we batted poorly,” the veteran of 98 Tests and 229 ODIs said.

Since the IPL season opener against Chennai, Mumbai have not had a solid start but Harbhajan hoped the problem would be solved once Sachin Tendulkar returns to the team.

“Of course, it will be nice to have Sachin Tendulkar back. I’m sure he will be back by the next game if nothing goes wrong by the net session. If he is batting with any of the foreigners it makes it easier for them to score runs. He can take a lot of pressure from the other partner,” he said.

Tendulkar has not played a game after getting hit on the finger in the IPL opener against Chennai Super Kings, but has started batting against throw-downs in the training sessions.

Asked about the absence of key pacer Lasith Malinga from the game, Harbhajan said the Sri Lankan was given a break as his back did not feel as good as before. He said Malinga would be available for the next home game on April 29.

“He’s OK, but his back is not the same as it was in the last game, so we wanted to give him a break for this game as it’s a long tournament. We don’t want him to get hurt in playing all these games. Hopefully he will be fine for the next game,” said Harbhajan.

Expressing concern over opener Richard Levi getting out to left-arm spin bowling for the third home game running, Harbhajan said other options could be looked into.

“Levi is having a bit of hard time with left-arm spinners and we need to reconsider what sort of other option we have.

We will see by the next game what is the best possible eleven we can play,” Harbhajan observed.

“We want Pollard to go and play freely. Even though he got out (early) today, I don’t mind (it) as he was the guy who got us out in the last game. I don’t want Pollard to change his game and at the same time we need someone who can hit big in the end. So I will keep myself down in the order but if we need to chase 170-plus I might as well go up.”

The off-spinner was also full of praise for the Wankhede Stadium track.

“It’s a great wicket. There was good bounce and carry and their fast bowlers bent their backs and got lot of bounce. Wankhede is probably the best wicket to play cricket in India. There is true bounce and if you have the capability as a batsman you can score a lot of runs, and as a seamer, you will have a lot of bounce.

“As a spinner also there is a lot of bounce and you can get wickets by beating them in air. But unfortunately in this format nobody looks to do that,” he said.

Harbhajan said he did not bowl in the game as he wanted others, who had not played in earlier games, to get a look-in. (PTI)