Buoyed by an upset win over Mumbai Indians in their tournament-opener, Pune Warriors will look to affirm their superiority over Kings XI Punjab when the two teams lock horns in the fifth edition of the Indian Premier League at the newly-constructed Subrata Roy Sahara Stadium on Sunday. 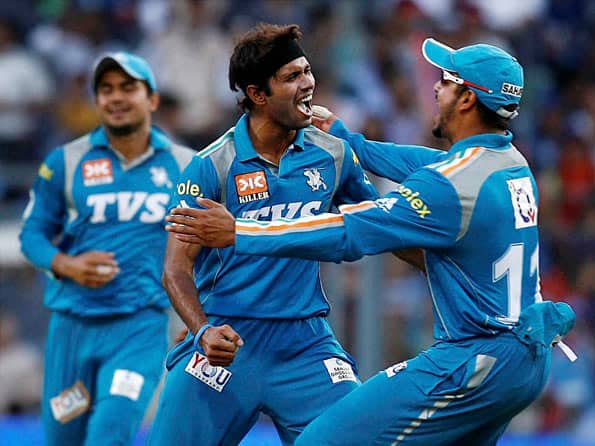 Buoyed by an upset win over Mumbai Indians in their tournament-opener, Pune Warriors will look to affirm their superiority over Kings XI Punjab when the two teams lock horns in the fifth edition of the Indian Premier League at the newly-constructed Subrata Roy Sahara Stadium on Sunday.

The hosts led by Sourav Ganguly, hunted in a pack to defend a small total against Mumbai, but a disappointing show by the batters will particularly be a cause of concern for them.

None of their batsman, except for man-of-the-match Steve Smith and Robin Uthappa, looked comfortable against the likes of Lasith Malinga and Pragyan Ojha. However, they might take heart from the fact that the KXIP doesn’t possess the same quality of attack as the Mumbai Indians did.

The onus will be on the top-order to provide a good start to the Pune innings.

Manish Pandey, who was castled by Malinga without even opening his account, would look to make amends against Kings XI. The opener has not been in great touch off late and would like to see himself back in the runs column.

Ganguly, meanwhile, would like to forget his dismissal against Mumbai in the opening game and bat through the innings.

The other worrying factor for the Warriors would be the indifferent form of Marlon Samuels. Though, he came handy with the ball, his batting is still scratchy.

KXIP, on the other hand, looked rusty in their opening encounter against Rajasthan Royals, with almost all their bowlers struggling to find the line and length against Ajinkya Rahane and co.

Praveen Kumar and James Faulkner went for 83 runs in their eight overs and their spinners too were wayward in their line.

The visitors will be particularly concerned about the form of Praveen, who was clobbered all over the park by the Rajasthan batsmen.

In the batting department, the side will want to see their previous edition’s hero, Paul Valthaty to come good against the likes of Ashok Dinda, who shaped Pune’s win with his four-wicket haul in their first match, and Wayne Parnell.

Although the skipper Adam Gilchrist looked in good nick against the Royals, the team would want him to stay at the crease for a longer duration particularly with Shaun Marsh looking woefully out of form.

In the middle-order, the responsibility will be on the shoulders of another Australian import David Hussey to guide the likes of Abhishek Nayar and Mandeep Singh.

The team, however, would take some positives from the way its tailenders contributed to the chase, helping it reach 160.

Both the sides would though be wary of the nature of the pitch at the newly-built stadium as it remains unchartered territory.

The hosts, however, hold a slight edge over their visiting counterparts with the kind of variety they have in their repertoire. (PTI)

IPL 2012: RCB-DD match gets underway in Bangalore under tight vigil