Shane Watson top-scored with a 36-ball 45 as Rajasthan Royals posted a challenging 162 for six in their Indian Premier League match against Mumbai Indians on Sunday. 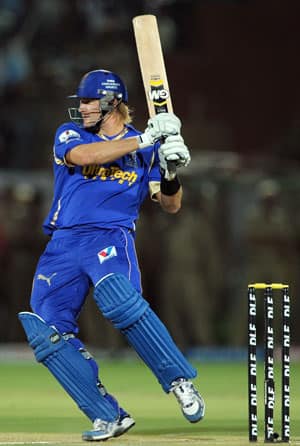 Shane Watson top-scored with a 36-ball 45 as Rajasthan Royals posted a challenging 162 for six in their Indian Premier League match against Mumbai Indians on Sunday.

Batting first after the coin landed in skipper Rahul Dravid’s favour, Rajasthan lost their openers early to be placed at 31 for two in the sixth over.

Dhaval Kulkarni accounted for both the batsmen – he had Dravid caught behind by Dinesh Karthik and then sent back the in-form Ajinkya Rahane as he pulled a short ball straight to midwicket.

Watson along with Stuart Binny added 53 runs for the third wicket to stabilise Rajasthan’s innings. What must have helped the hosts was that the two consumed just six overs to add those runs.

Both played some effective shots during their partnership and prominent among those were the six by Watson over deep midwicket off Dwayne Smith, and Binny’s slog-swept maximum off Harbhajan Singh over deep square leg.

Even the quick Lasith Malinga got a bit of stick initially as Watson picked two fours against the Sri Lankan.

A moment of indiscretion cost Binny his wicket as Kieron Pollard ran him out to cut short his innings at 30 off 17 balls. Binny hit three fours and two sixes.

But Watson continued to fight as he smashed Pollard for a massive six over deep midwicket and followed that with a four to fine leg.

However, while going for one too many, Watson ended up holing out to deep midwicket after mistiming Pollard’s final delivery in the 14th over.

Shah then produced a few hits to the fence, including a six and a four off Pollard, to prop up Rajasthan’s innings.

Shah was, to an extent, helped by Malinga as the Lankan made a mess of a chance in the deep after failing to judge the ball.

Menaria, too, looked in good nick and contributed 21 off 20 balls, which included an upper cut six off R P Singh over third man. Luck was on Menaria’s side as the batsman, after being cleaned up by Malinga, found that the bowler had overstepped.

In the final league game of the season, with the playoff places already decided, Rajasthan have brought in Dishant Yagnik for Shreevats Goswami and Brad Hogg in place of Johan Botha. (PTI)