Statistical highlights of the Indian Premier League match between Rajasthan Royals and Pune Warriors on Sunday. 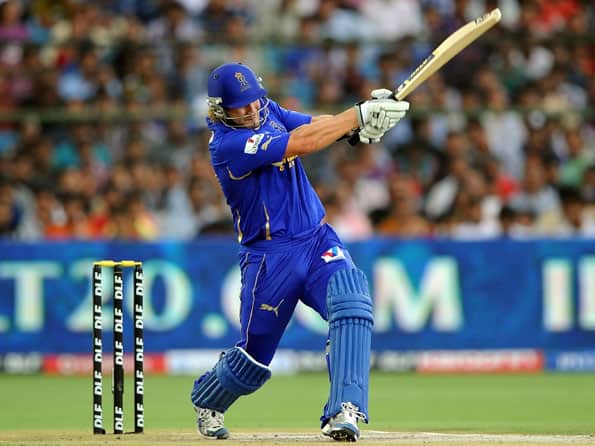 Statistical highlights of the Indian Premier League match between Rajasthan Royals and Pune Warriors on Sunday.

# Kolkata Knight Riders (between April 27, 2009 and May 16, 2009) and Pune Warriors are the two teams to have lost eight consecutive games in the IPL history.

# Ashish Nehra (3 for 23) has registered his best bowling performance in the present competition.

# Shane Watson received his 12th Man of the Match award for his excellent all-round performance in Twenty20 – his eighth in the IPL and third in the present tournament.

# Shane Watson (58 off 31 balls) has registered his second fifty in the present edition of the IPL.

# Watson’a superb match-winning fifty is his ninth in 37 matches,

# Watson has posted a half-century and bagged two wickets or more in the same game six times in the IPL.

# Rajasthan have won seven and lost seven out of 14 played in the current tournament.

# Rajasthan Royals have won all three games against Pune Warriors in the IPL.

# Rajasthan Royals (170/4) have recorded their highest total against Pune Warriors in the IPL.

# Ajinkya Rahane, with eleven catches in 14 matches, is the top fielder in the 2012 edition of the IPL.

# Rahane’s magnificent 61 off 47 balls is his sixth half-century in the IPL.

# Ajit Chandila has registered his first instance of four wickets in an innings in Twenty20.

# Ajit’s outstanding figures of 4 for 13 are the second best by a bowler from Rajasthan Royals in the IPL, next only to Sohail Tanvir’s 6 for 14 against Chennai Super Kings at Jaipur on May 4, 2008.

# Murali Kartik has continued his flop show in the IPL 5, claiming only four wickets at an average of 66.50 in eleven matches for Pune Warriors.

# Ajit Chandila is the first bowler to register a hat-trick for Rajasthan in the IPL. Yuvraj Singh and Amit Mishra are the only two bowlers to have recorded the feat twice in the IPL.