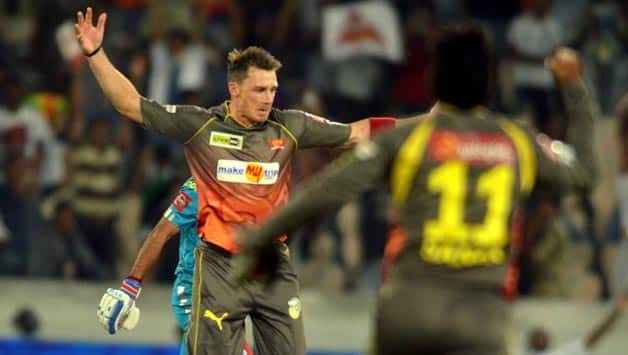 “130 runs would have been close to impossible to get. Both teams bowled really well. Tonight was a game for the bowlers definitely. So hats off to both sides for fighting it out till the last over,” he said, in an interview with iplt20.com

“I didn’t really expect to bat but I think it was one of those wickets where it was always going to be a difficult chase,” he added.

Steyn was right on the money when he sent back Delhi opener David Warner in the first over.

” It was nice to get a wicket early, to get somebody like David Warner who is a great player and he can take the game away from you, we know that and so it was nice to get a wicket. And the early same thing with [Mahela] Jayawardene and Viru [Virender Sehwag]; to get early wickets like that puts the [opposition] team on the back foot. If we hadn’t got those wickets they could have gone on to make 130 maybe 140 and I think it would been a really difficult score to try and get.”

Steyn also sounded upbeat about the current season, with a brand new name, jersey and ownership coming along. With three wins from four matches, the Sunrisers Hyderabad are sitting pretty at the second spot on the points table.

“You win one game with a lot of fighting spirit and then you win another one and there is a little bit of belief that creeps in. We lost the game the other night to RCB where I thought Virat (Kohli) batted particularly well. Then tonight again it was good all round performance, everybody contributed again we batted all the way down to No 9 and everyone went out there and did their part to win the game. So it’s been the strength of our side where everybody has contributed where they can to win a cricket game.”

Steyn, who spearheads the bowling attack, also spoke about what goes behind spacing his spell of four overs.

“It is difficult. You have to read the game a little bit and we don’t plan that I am going to bowl two upfront and then I am going to bowl one in the 15th or 18th over. There is no kind of real planning we just kind of have the idea that I am going to maybe bowl two over’s upfront and try and take a wicket, and then the next over’s really depends on whether the captain wants a wicket so I come back and bowl whether we want to try and defend at the death so. It all depends on the day,” he said.

Steyn also spoke of the confidence ahead of the game against the Delhi side despite losing their previous game to the Royal Challengers Bangalore.

” The game for Delhi Daredevils, they have been a bit undercooked this season so we kind of knew that if we played our best cricket they would probably only give us about seventy percent competition. I think (the target of) 115, if we would have gotten a good start, it would have felt like only seventy runs for them on the board. But they fought well tonight. They are a good side. They really are a good side, they just haven’t clicked yet.”

On Friday night, Steyn’s services with the bat were required to take Sunrisers Hyderabad to the finish line. Talking about the situation and the pressure, he said, “There wasn’t really any pressure. You either going to win or you are going to lose so it’s one of the two things. I just want to put bat on ball and try and score the runs. Luckily we didn’t have to score more than six runs per over so it was really just bat on ball and it was really was just our game to lose.”

IPL 2013: Sachin Tendulkar and Ricky Ponting under pressure to fire as a partnership