In the pulsating closing moments of their Indian Premier League (IPL) match against Sunrisers Hyderabad, Delhi Daredevils seriously thought Amit Mishra should have been given out for obstructing the field while taking a run Friday. 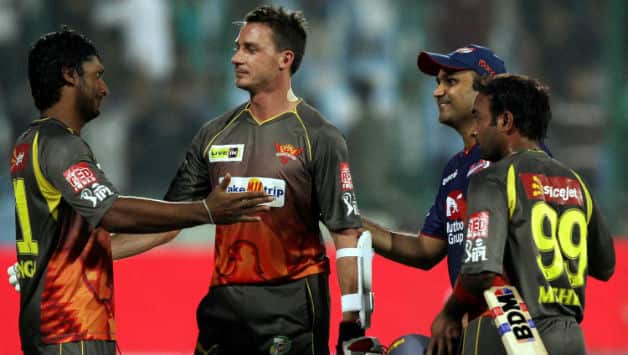 In the pulsating closing moments of their Indian Premier League (IPL) match against Sunrisers Hyderabad, Delhi Daredevils seriously thought Amit Mishra should have been given out for obstructing the field while taking a run Friday.

Mishra was adjudged man of the match for his one for 15 in his four overs of leg-spin, and then an unbeaten 15 to steer the Sunrisers to victory from a critical position.

In the last over of the match, he tried to sneak a single after attempting a paddle shot, and Daredevils captain Mahela Jayawardene and Irfan Pathan appealed against Mishra’s course of running.

The umpires went upstairs and the replays clearly showed that Mishra was just racing through with his head down.

The appeal was rejected and Mishra escaped from becoming the first batsman in the IPL to be given out for obstructing the field.

The new playing condition was introduced Oct 1, 2011, clarifying that “on appeal from the fielding team, if the umpire feels that a batsman, whilst running between the wickets, has significantly changed his direction without probable cause thereby obstructing a fielder’s attempt to run him out, the batsman should be given out obstructing the field. It shall not be relevant whether a run out would have been affected or not (Clause 37)”.

The new clause makes it clear that it enhances Law 37 and does not replace it.

“The circumstances described in the new playing condition (i.e. a batsman significantly changing his direction of running without probable cause) are only one example of an action which will qualify as willfully obstructing the field.”

“Accordingly, it is still possible for a batsman to be given out obstructing the field in circumstances where he has not significantly changed his direction of running provided that the umpire feels that by some other actions it is clear that the batsman had intended to obstruct the field. This will depend on the circumstances of each case.”

In making a decision, the on-field umpires are entitled to consult the third umpire in deciding whether the obstruction was willful or not with the final decision being made and conveyed by the relevant on-field umpire (Clause 2.4 of the relevant appendices of the DRS or TV replay system).

Slapgate: Lalit Modi asks media not to harass him