Gautam Gambhir has won the toss and chose to bat first. Kolkata made five changes to their line-up. Hyderabad have one change as Ishant Sharma is ill and Anand Ranjan replaced him. 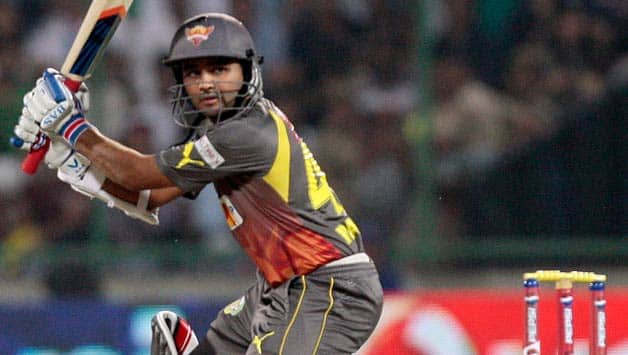 Sammy!! As cool as a Sunday morning in the Caribbean!! Lofts two consecutive sixes off Abdulla to take Hyderabad through. Delhi here we come say Hyderabad. Sammy has done the trick.

Hyderabad are slipping. A fantastic Yorker by Shami flicks Perera’s leg-stump. No one realises that the bails are off. Samantray flicks his first ball past short fine-leg for four. The quiet crowd comes back to life.

Narine builds the pressure with a maiden. Are the home side crumbling. It is a a big moment in the game.

Another one bites the dust! Vihari top-edges a sweep and is caught at backward point. A time-out is called for.

White is run-out. He pushes to the off-side and Vihari doesn’t respond. He is left stranded as Kolkata celebrate. Some nerves are there? Kolkata crowd around the bat.

Hundred up for Hyderabad. Parthiv is adjudged leg before and he is not happy. He walked across the line and tried to flick Abdulla to the leg-side. He shows his bat to the umpire to suggest that he got something on it.

Kolkata are losing the plot here. Shami bowls five wides down the leg side. Hyderabad need only 33 runs off 43 balls.

Abdulla bowls one down the leg-side and Parthiv lifts him over fine-leg for four. Dhawan tries a reverse-sweep, but misses and is trapped in front. A good innings that puts his team on the road to Delhi.

These two are doing it easily. Now they are turning the strike over and dealing in singles and twos. They need only 47 off the last nine overs.

Dhawan is now getting into his elements. Shami pitches it short down the leg-side and Dhawan just gets a glove to guide it fine for four. He then shuffles in his crease and flicks one through the leg-side for a similar result. Hyderabad are on their way to Delhi are they!

Hyderabad’s 50 is up. They have improved as a batting unit and needed this performance in such a crucial game. Kallis sees Dhawan coming down the wicket and pitches it short. Dhawan manages to smash it over point for a six. What a shot that one! He then gets a four off the next over covers.

Shami Ahmed is given the ball. He starts off well as only four come off that over.

Parthiv is making merry here! He first cuts Pathan behind point for four and then sweeps him for another. Dhawan comes to the party by lofting Pathan over mid-wicket for a huge six.

The mysterious Narine comes to bowl and guess what! Parthiv rocks back first ball and lofts it over short fine-leg for four. He is looking in awesome touch here.

Parthiv walks down the track and lofts him over the off-side for a four. The ball was short outside the off-stump and it gets what it deserves.

Good over by Pathan. Only four runs coming off that. Hyderabad have started decently.

Sangwan is welcomed into the attack with two fours by Parthiv. The first one was cut behind point and he flicked the second through fine-leg.

Hyderabad begin their pursuit of 131. Pathan is given the ball first-up. Only three runs off that over.

Ranjan runs in to bowl the final over and has Narine out caught off the first ball. It was a fantastic catch at point by Perera as he dived forward to clutch it. Ranjan gives nothing away, until Pathan smashes a six off the final delivery.

So, Hyderabad have done well to keep Kolkata to 130. They now need to chase it down to qualify for the play-offs. Will they do it? Join us in a few minutes from now for their run-chase.

Dogra tried to emulate Pathan, but gets caught at long-on as Steyn celebrates another wicket. A great contest here! Steyn bowls a good short ball to Pathan. The batsman replies by smashing him over mid-wicket for a huge six. An animated Pathan keeps his bat down and raises his hands to clap.

We have the first six of the game. Pathan goes high over the bowler and gets maximum.

What a ball by Mishra! The googly turns copiously and traps a surprised ten Doeschate in front of the stumps. Kolkata bring up their hundred.

Steyn gets the better of his South African team-mate. Kallis heaves to the leg-side and gets the elevation, not the distance and Shikhar Dhawan takes a good catch in the deep. The Dutchman — ten Doeschate comes in and is given some chin music.

Perera strays down the leg-side and Pathan flicks him easily for four. There are occasional boundaries

Pathan is on song here. He nearly takes off Asad Raud, but the umpire gets out of the way in time as the ball goes to the boundary.

A boundary at last. Pathan delicately guides Perera fine to third-man for four.

Mishra has been fantastic. The batsmen cannot play the big shots and only manage to score six runs in this over.

K Sharma gets the big one. Morgan misses the sweep and is trapped plumb in front by the leg-spinner. The Umpire has no hesitation in raising his finger.

The in-form Mishra gives nothing away does he! Bowls a tight line and keeps the Kolkata batsmen quiet. They finish the half-way mark at 56 for two. Kolkata need to up the ante.

Karan Sharma comes in and is greeted by an audacious reverse sweep by Morgan — which goes all the way for four. There is a big appeal off the next ball, but the umpire is unmoved. K Sharma has come back well after the boundary off the first ball.

Disaster for Kolkata! Gambhir cuts Mishra straight to the fielder and sets off for a run. Kallis doesn’t move and Gambhir finds himself stranded. There was no single there and Parthiv finished the job at the striker’s end. The inventive Morgan comes to the centre. Vihari makes up for his effort of the previous effort, with a good slide to save a boundary.

Darren Sammy bowls a decent first over, but goes for runs. Hanuma Vihari misfields as Kallis picks up his first boundary. Kallis then tries a heave over the leg-side, but gets an inside-edge that goes between the keeper’s legs for four.

Ranjan continues into his third over. White almost pulls off a fantastic catch. Gambhir made room and tried to smash it over cover. White flew to his left and got a hand, but couldn’t hold on. Would have been a ripper had he taken it.

Perera is now into the attack. He strays down the leg-side and Bisla flicks him over short fine-leg for a four. Perera hits back by dismissing him. Bisla tried to play across the line, but got a top-edge. White settled under it at coiver and took an easy catch.

A very good over there by Ranjan. Kept Gambhir tied up at one end. Gambhir completes 400 runs in IPL 2013 with a quick single.

Steyn gets it wrong there. Pitches it outside leg and it goes all the way to the boundary. Parthiv has no chance there. He makes a good comeback later in the over with two good bouncers to Bisla — who lets it go through to the keeper.

Anand Ranjan is brought into the attack. He starts off well, but Bisla lofts him over wide long-off for a four off the third ball.

Bisla startes things off with a four through point. Steyn was a touch wide and Bisla merely guided it.

Gautam Gambhir has won the toss and chose to bat first. Kolkata made five changes to their line-up. Hyderabad have one change as Ishant Sharma is ill and Anand Ranjan replaced him.

Hello and welcome to our coverage of the last league game of the Indian Premier League (IPL), 2013. Sunrisers Hyderabad take on the Kolkata Knight Riders with the spot in the play-offs at stake.

The other team watching this contest with keen interest is the Royal Challengers Bangalore. A win will take Hyderabad through, otherwise Bangalore would have the last laught. I am Nishad Pai Vaidya and will take you through this game.