Mumbai Indians coach John Wright said that his IPL side have plenty of talented players and selecting the playing eleven sometimes becomes the hardest thing. 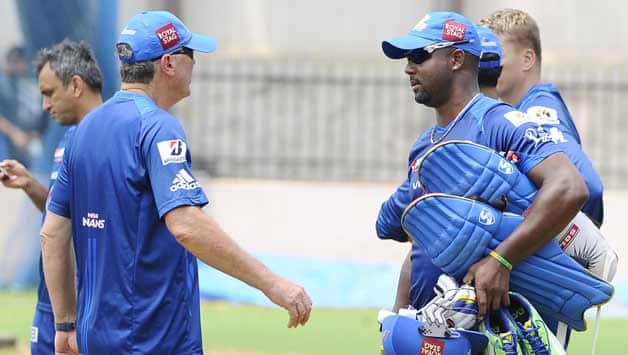 Mumbai Indians coach John Wright said that his IPL side have plenty of talented players and selecting the playing eleven sometimes becomes the hardest thing.

“We have so many talented players like Glenn Maxwell, Yuzvendra Chahal, Nathan Coulter-Nile, Dwayne Smith and even an experienced bowler Munaf Patel could not be included in the scheme of things.

It is important that everybody is happy,” said Wright on the eve of MI’s IPL 6 league match against Rajasthan Royals.

Refusing to comment on what can happen when Harbhajan Singh and S Sreesanth face each other tomorrow, the MI coach said, “Every game is competitive and people like [the] edge. We have a history with every team and personal matters. You have to be patient and the question is how they play within the rules.”

Wright conceded that more aggressiveness has crept into the game.

“It has become part and parcel of the game. Everyone wants to win now and such kind of behaviour is expected with hard competitive games and has not surprised me.”

Wright also felt that it was too early to say that Sachin Tendulkar and Ricky Ponting have not been able to do well in the openers’ roles.

“Sachin has played a good knock and unfortunately he was run out twice. It is too early to say that they have not done well. Here too, we are seen as favourites but the Royals are a good side and they have played hard and good cricket. It is going to be a tough game,” he said.

“We are looking at one game at a time and have prepared well. We will have to adapt to conditions and wicket. We started on happy note and also suffered a loss. But we have dominated [the] previous two games.

“The performance of a couple of players is enough to win any game in this format. There are [a] few match winners. The major attraction of this format is the unpredictability. The game changes quickly and people love it,” he added.