Pune Warriors India slipped to their third defeat in four matches in the sixth edition of the Indian Premier League (IPL), losing to Mumbai Indians by 41 runs. Mumbai thus skipped over to the top of the points table with six points from four games. 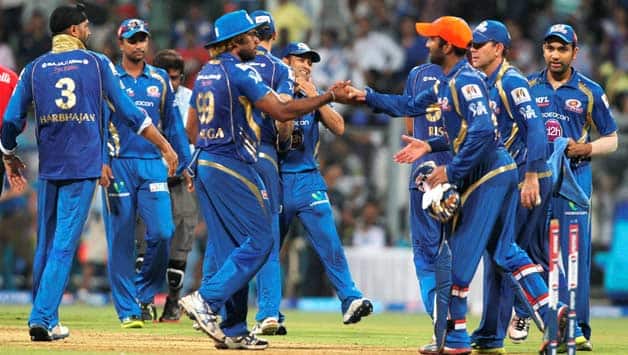 Pune Warriors India slipped to their third defeat in four matches in the sixth edition of the Indian Premier League (IPL), losing to Mumbai Indians by 41 runs. Mumbai thus skipped over to the top of the points table with six points from four games.

Mumbai almost had one hand on the two points on offer after posting 183 on the board. Pune’s batting, which has failed to click save for the game against Rajasthan Royals, produced another hapless show at the Wankhede Stadium.

Chasing 184 was never going to be easy, but Pune themselves would have been flabbergasted with their start. Mitchell Johnson, who has been pushed down the pecking order in the Australian bowling line-up, gave his Ashes selection a strong impetus right from the first ball of the innings. Johnson got a wonderful in-swinger in that foxed his Australian counterpart Aaron Finch and bowled through the gates. Finch, on his part, erred with his foot placement and was far too late in bringing his bat down as Johnson struck timber.

Mumbai skipper Ricky Ponting decided to stir things up by bringing in Pragyan Ojha from the other end straight away. Robin Uthappa flicked the left-arm spinner towards square-leg first ball and Ross Taylor at the non-striker’s end immediately took off for a single. Uthappa wasn’t interested and sent the New Zealander back. It was too late as Taylor was more than halfway down the track; Ambati Rayudu got across a flat throw across to Ojha, who flicked the bails off with Taylor a few yards short.

Pune’s evening was to get even gloomier as Johnson continued to fire in his probing in-swingers. Uthappa was clearly struggling to judge the curve of Johnson’s deliveries and it was only a matter of time before his stumps went flying too. It was another peach of a delivery from Johnson that got the wicket; Uthappa tried to drive it towards mid-off, but erred by leaving a gaping hole between bat and pad that was enough for the ball to pierce through and knock down his off-stump.

Tirumalsetti Suman joined Yuvraj Singh in the middle and the duo just about managed to restore faith in the considerable number of Pune fans who had traversed the Mumbai-Pune expressway to watch the game. They put on 25 quick runs, with Suman hitting five boundaries for his 23 before his impatience got the better of him. Suman looked to clear long-on in the sixth over, bowled by Harbhajan Singh, but could only find the big hands of Kieron Pollard stationed in the deep.

Yuvraj Singh carted a couple of sixes as his skipper Angelo Mathews joined him in the middle, before the former holed out to Rishi Dhawan at deep mid-wicket. Pune were 71 for five in the 10th over and now surely heading towards defeat in this year’s first Maharashtra Derby.

In the end, it was too much of a deficit for Mathews and Mitchell Marsh to overcome. The latter played a fine cameo towards the end, scoring 38 off 26 balls, before falling to a superb catch by Dhawan in the deep. The 23-year-old all-rounder, who plays for Himachal Pradesh in the Ranji Trophy, is proving to be quite a find for Mumbai, especially in the fielding department.

Eventually, Pune managed only 142 for eight in 20 overs and have a lot to ponder over, especially in the batting department, before their next game.

Johnson was the pick of the bowlers for Mumbai, taking three for 33 along with the Purple Cap.

Earlier, Mumbai Indians put on an imposing total of 183 for three in their alloted overs, buoyed by blitz of a half-century from Rohit Sharma (62 off 32 balls, 3×4, 5×6). The home team were also helped to their total by quickfire forties from Sachin Tendulkar and Dinesh Karthik, as the Wankhede Stadium witnessed an action replay of their team’s innings against Delhi Daredevils a few days ago.

Ponting won the toss and put his team in to bat on what looked like an ideal Twenty20 surface. The Pune Warriors tried to mess with Mumbai’s head, starting their bowling with the part-time spin of Finch, who had all of one First-Class wicket(s) to his name. Finch kept it tight, giving just three runs, but failed to dislodge Pondulkar. Bhuvneshwar Kumar then troubled Ricky Ponting with a couple of in-swingers before erring and bowling short to one of the most prolific pullers in cricket; Ponting happily sent the ball racing to the mid-wicket fence.

Tendulkar had a nervy start, barely managing to negotiate Finch’s first over. But the Little Master let loose in the third over of the innings bowled by Ashok Dinda, first casually flicking him past fine leg, who was in the circle, for four. The raucous Wankhede crowd were then treated to a shot they had seen all too often — the 39-year-old played one of his trademark backfoot punches through the covers for four more. Dinda begged to be spanked more and bowled full and wide to Tendulkar the next delivery, which was gently lifted over point for another boundary. Tendulkar wasn’t done yet for the over as he got a fourth successive boundary with a gentle, yet effective drive past mid-off for four more off a slower one; the Mumbai Indians were up and away. The crowd, meanwhile, had already gotten their money’s worth — a Ponting pull and a Tendulkar cover drive. But they were not going anywhere.

It seemed that even Yuvraj Singh, fielding at mid-on, wanted more of the carnage as a simple low catch slipped through his fingers and went through his legs for four. Tendulkar punished Yuvraj’s uncharesteristic rustiness by getting down on a knee to off-spinner Rahul Sharma and going against the turn of the ball to spank it for six over wide long-on.

However, Yuvraj was to make amends soon as he was brought into the attack and got Ponting (14) caught at point first ball to end Pondulkar’s 54-run partnership. The Mumbai Indians partisan crowd was further silenced an over later as Finch got a second chance to turn his arm. Tendulkar first executed one of his favourite shots, the paddle sweep, for four down fine-leg before going for the big straight drive looking to clear the sight-screen. However, he did not middle it and was caught by Mitchell Marsh for 44 off 29 balls.

It was here that the Wankhede was transported to about four days ago. Karthik and Rohit, who had put on 132 runs against the Delhi Daredevils for the third wicket, came in for Take 2 as they carried forward the impetus provided by the openers. Karthik had been robbed off his Orange Cap for most runs by Virat Kohli between the two games and wanted it back as soon as possible. The aggressive right-hander went past Kohli’s tally of 198 runs with a massive heave for four to the deep-mid-wicket fence off Yuvraj before lofting the left-armer through extra cover.

The duo soon brought on their 50-partnership and MI’s 100, before Marsh dismissed DK leg-before for 41 off 29 balls. Mumbai were 115 for three at this stage in the 16th over as Kieron Pollard walked in at No 5 to loud cheers. Marsh, meanwhile, finished a tidy over, conceding just three runs, to put some pressure on the home side.

Like against Delhi, Rohit took charge of the reins and swung the momentum back in Mumbai’s favour as he carted Dinda for six over long-on, before completing the dozen with a mistimed pull that still managed to sail over wide long-on. Pollard was a quiet spectator as this happened, and Yuvraj committed the cardinal sin of poking the giant bear.

Yuvraj caught Pollard out of his crease and had a shy at the stumps from mid-wicket; the ball hit Pollard on the arm and the big Trinidadian gave the Indian a stare as he shook it off. The next ball, from Marsh, was dispatched to the deep backward square-leg fence via a massive pull. The following delivery was hit with even more brute force for six over deep mid-wicket. Rohit ended the over with another duet of four and six runs as Marsh went for 21. In all possibility, the blame did not lie with him, but his teammate.

Pune skipper Angelo Mathews did well to concede just the one boundary in the penultimate over, before Rohit made Dinda pay for his captain’s stinginess by hitting two huge maximums. Dinda ended up with figures of 4-0-63-0 — the most expensive spell in IPL history, and perhaps a statistical picture of the carnage suffered by Pune.