In a bottom-of-the-table clash, the Delhi Daredevils play the Pune Warriors India at Raipur in the Indian Premier League (IPL) on Sunday. It has been a disastrous tournament for both teams so far with Delhi posting just one win in eight games, while Pune can boast of one more than their opponents. 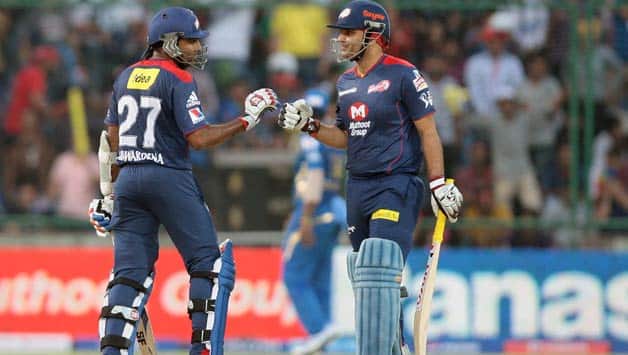 In a bottom-of-the-table clash, the Delhi Daredevils play the Pune Warriors India at Raipur in the Indian Premier League (IPL) on Sunday. It has been a disastrous tournament for both teams so far with Delhi posting just one win in eight games, while Pune can boast of one more than their opponents.

While Delhi’s problems are all to do with an inconsistent and almost sorry batting unit, Pune haven’t really performed so badly as to deserve just two wins in eight matches. As if on cue, there is almost always some spectacle that transpires against Pune when they’re on field. If it was Amit Mishra’s match-turning hat-trick that triggered a dramatic Pune collapse from 101 for four to 108 all-out, it was Chris Gayle’s indomitable magnificence in Bangalore which took the game far from their reach.

The Warriors, on their part, have shown a knack of snatching defeat from the jaws of victory and are guilty of not being able to finish off games after a good start. Pune don’t have a bad team as such. Yes, their bowling line-up could do with at least one more match-winner apart from Bhuvneshwar Kumar, but Pune have managed to not do too badly with the resources available, not counting Gayle’s freak show, of course. However, apart from Bhuvi, who managed to give away just 23 runs in his four overs while the rest of the bowling was murdered by Gayle, Pune clearly lack something there. Ashok Dinda has been a clear failure in the tournament and Pune could consider replacing him with tweaker Parvez Rassol, with plenty of other medium-pace options available in the team.

While their batting includes sufficient firepower in stand-in captain Aaron Finch, Robin Uthappa, Yuvraj Singh and Steven Smith, the onus always lies on the opening pair to provide a good start and if that doesn’t happen, it’s more often than not a collapse. Young Smith has provided some solidity to the middle order and could do with more help from the likes of Yuvraj who has failed to impress with just 104 runs in five matches.

As for Delhi, they are all but out of contention for the knock-outs. Winning all eight of their remaining games should get them there, but looking at their performance in the tournament, it looks a very distant possibility. The Daredevils’ problem lies with the fact that they are heavily dependent on their top order. If even two out of Virender Sehwag, Mahela Jayawardene and David Warner fail, the writing is on the wall that Delhi are on their way to a collapse.

In bowling, Delhi need to get Morne Morkel back into the team. You cannot drop one of the world’s best fast bowlers from the team in times of a crisis. Johan Botha was picked over his South African compatriot because of his superior batting credentials, but has done little to warrant a place in the squad. The Daredevils could even consider giving Varun Aaron a game in place of the rather hapless Ashish Nehra or Ajit Agarkar. Siddharth Kaul, or even Unmukt Chand, could be brought in at No 4, with Manprit Juneja unable to convert starts.

It’s definitely curtains for the team that loses this clash. Thus, we could be in for a feisty encounter on Sunday evening.