It is the clash of the titans at the Indian Premier League (IPL) 2013. Captain Cool Mahendra Singh Dhoni’s Chennai Super Kings take on Ricky Ponting’s Mumbai Indians at the M.A.Chidambaram Stadium. The two sides have often produced humdingers and expectations are sky high when they face-off. 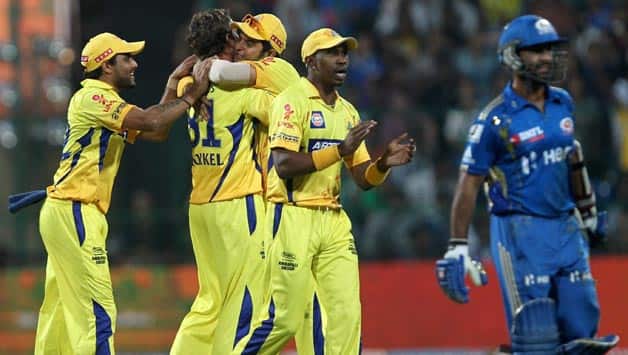 Chennai Super Kings will starts their campaign against Mumbai Indians on their home ground, M.A.Chidambaram Stadium on Saturday © PTI

It is the clash of the titans at the Indian Premier League (IPL) 2013. Captain Cool Mahendra Singh Dhoni’s Chennai Super Kings take on Ricky Ponting’s Mumbai Indians at the M.A.Chidambaram Stadium. The two sides have often produced humdingers and expectations are sky high when they face-off.

It is Chennai’s first game of the season and they would target a good start. Although they are the most successful side in the IPL, records would suggest that they aren’t very good starters. It takes them a bit of time to get into their elements and then dominate all the way.

For their opening game, Chennai wouldn’t have the services of Albie Morkel, who is to play for the Titans in the Ram Slam T20 Challenge final for the Titans in South Africa. Even Faf du Plessis would be missing in action as an injury will keep him out from the first few games. Nuwan Kulasekara and Akila Dananjaya would not be available for their home games as the Sri Lankan players will not feature at Chennai. So Chennai are effectively four men down in the lead-up to their first match.

However, Chennai have the most settled combination and the great thing is that the replacements blend into the setup easily. Michael Hussey and Dwayne Bravo would be the two certainties (foreign players). The in-form Murali Vijay would open the batting with Hussey. They would be followed by Suresh Raina, Subramaniam Badrinath, Dhoni and Bravo.

India’s new spin twins, Ravichandran Ashwin and Ravindra Jadeja would be the trump-cards as they are coming off a fantastic Test series against Australia. T20 cricket may be a different ball-game, but the confidence would be high. Jadeja would fit in as the all-rounder at number seven and that confidence may spill into his batting.

The Chidambaram Stadium is Chennai’s fortress and they bank on spin to deliver the goods. That might allow Shadab Jakati, the left-arm spinner to come into the side. For the two fast-bowling slots, there would be competition between the foreign recruits — Ben Hilfenhaus, Dirk Nannes, Jason Holder and Ben Laughlin. Hilfenhaus should make the cut as he did well for them last season. Nannes merits a place ahead of the others given his speciality for the format.

Mumbai, after suffering a heart-breaking loss against Royal Challengers Bangalore, would be looking for their first win of the competition. It was a game they should have, only to let loose the grip in the last over. They had done well to restrict Bangalore to a gettable score and then recover during their run-chase. Mumbai haven’t been good finishers and that habit came back to haunt them in their opening clash this season.

Considering their overall performance, Ponting wouldn’t think about making too many changes, but the conditions may demand a few. There may be a temptation to play the extra spinner as the Chennai surface helps that variety. Pragyan Ojha can come in to replace the youngster Jasprit Bumrah or a Glenn Maxwell may be considered in place of a Mitchell Johnson or a Kieron Pollard. It would be a very tricky call as that would mean replacing a bowler who has performed well in the previous game. Munaf Patel went for runs against Bangalore, but should hold on to his spot.

The dangerous Lasith Malinga missed the first game and Ponting had announced that he would join the side on April 5. If fit and available, he would walk into the side.

The Mumbai batting is more or less settled. The opening partnership needs to gel well as the two legends — Ponting and Sachin Tendulkar have to get a move on earlier.

The last time the two sides met at the Chidambaram Stadium, it was the opening game of the IPL 2012. Mumbai breezed past Chennai without much difficulty. It isn’t often that Chennai concede a game so easily and expect them to defend their fortress strongly this time against a wounded Mumbai unit.

Both Rahul Dravid and Shane Warne have been equally approachable, says Ajinkya Rahane