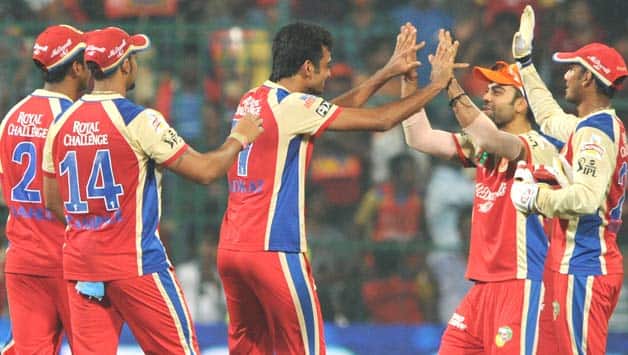 Bangalore won their previous encounter against Delhi Daredevils not before a pulsating Super Over. Their immediate concern will be the performance of the middle-order. After AB de Villiers’ run-out the middle-order struggled to get run-a-ball score.

Chris Gayle played a cameo against Delhi. Never rule out Gayle threat. But Bangalore are a tad vulnerable when the West Indian southpaw fails to click. Virat Kohli is in tremendous form this season. De Villiers is the man who has produced exhilarating shots. It is time that the Indian batting unit complements these international superstars.

Bangalore’s bowling looks sorted. Jayadev Unadkat and Vinay Kumar have been impressive. R Singh is a tad wayward and will need to put his hand up as a senior member. It will be interesting to see if Ravi Rampaul plays ahead of Muttiah Muralitharan. Bangalore track has very little for the spinners. The management might pick Murali Kartik ahead of J Syed Mohammad. But expect a fast bowling fiesta in Bangalore.

Rajasthan are bubbling with confidence after their thumping win over Mumbai Indians. Their bowling has been top-notch. Sreesanth is certainly going to make a comeback in the side. Ankeet Chavan probably has to miss out. James Faulkner has been a find for Rajasthan. Kevon Cooper and Stuart Binny might be handful on Saturday’s encounter. Siddharth Trivedi’s stump-to-stump line has been effective so far.

Ajinkya Rahane has anchored the innings perfectly in the last two encounters against Kings Xi Punjab and Mumbai Indians respectively. With him being in form, and Shane Watson due for a big score Rajasthan are really optimistic.

Dishant Yagnik’s foray against Mumbai gives Rajasthan management a chance to experiment with their batting line-up depending on the kind of start. Rahul Dravid is agile and fit at 40. He has looked compact; expect him to be the lynchpin if the ball starts moving.

The most intriguing battle will be between Ajit Chandila and Chris Gayle. Last season Dravid had talked about Chandila being the surprise weapon against Gayle. Chandila is on a high after getting prized scalps of Sachin Tendulkar and Ricky Ponting in their previous encounters. He has also got a hat-trick in the last edition of the competition.

Last time the two teams met at this venue, Ajinkya Rahane scored a magnificent century which broke the spirits of the Challenges. Bangalore will be looking to exact revenge on Rajasthan and give their campaign a major fillip with a win.