Bruised and battered in their previous match against the Mumbai Indians, MS Dhoni-led Chennai Super Kings travel to Hyderabad to take on the Sunrisers in a hope to get back to winning ways in the Indian Premier League 2013. 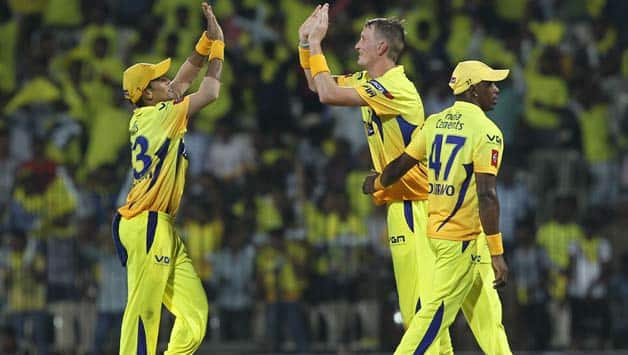 Bruised and battered in their previous match against the Mumbai Indians, MS Dhoni-led Chennai Super Kings travel to Hyderabad to take on the Sunrisers in a hope to get back to winning ways in the Indian Premier League 2013.

Less than a week ago, MS Dhoni & Co. folded for this year’s lowest total in the IPL on what was touted as a batting strip at the Wankhede stadium. They retained their spot at the top but the loss was the shake up they needed to ward of any complacency that was starting to creep in. As for the Sunrisers Hyderabad, they face a huge task ahead of them in their bid to stay alive in the tournament.

Mumbai Indians’ emphatic win over the Chennai Super Kings has had its repercussions on both these sides. While it gives Chennai a reason to work harder than they have in a good season so far, it nudged Sunrisers out of the top four spot, putting additional pressure on them to up the ante.

The home side routed the Delhi Daredevils in Hyderabad but face a tough task against the Chennai Super Kings. They will take heart from the effort of the Mumbai Indians bowlers and hope to see Dale Steyn & Co. weave similar magic. Their batsmen were hardly tested in their previous fixture and one can expect them to play the same side.

Chennai Super Kings batsmen may have floundered a bit but it is the same line-up that won seven consecutive games. While trying to read what went wrong in the previous match, MS Dhoni will be careful not to tinker too much with the combination that has proved its worth so far. The only change could probably be the return of Wriddhiman Saha in place of Murali Vijay, if he is fit. Dhoni would rely on Dwayne Bravo — the purple cap holder — to trouble the fragile batting line-up of the Sunrisers. The likes of Chris Morris and Mohit Sharma have already done well against the Sunrisers in their previous fixture at Chennai and will look to emulate that effort.

In the current scenario, Chennai look the superior outfit as they will be looking to nurse their wounds. They have already made it to the playoffs and would want to win the remaining matches and stay at the top spot. As for the Sunrisers, they will play under immense pressure after being pushed out of the fourth spot recently. Royal Challengers Bangalore’s defeat to the Kings XI Punjab on Monday has opened up the table further, and the Hyderabad side need to seize the moment. A win over Chennai could be a strong step forward for them. But, it won’t come easy.

Cheteshwar Pujara: I just need to continue the way I am batting