Rewarded for their team effort and consistency so far in the tournament, it will be a test of character for Rajasthan Royals as they gear up to take on heavyweights Mumbai Indians in their Indian Premier League (IPL) match at Jaipur. 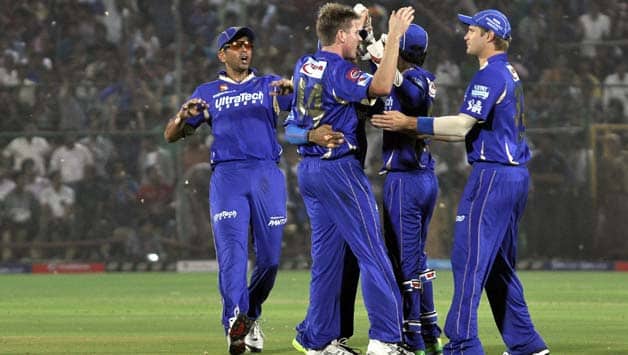 Rewarded for their team effort and consistency so far in the tournament, it will be a test of character for Rajasthan Royals as they gear up to take on heavyweights Mumbai Indians in their Indian Premier League (IPL) match at Jaipur.

Skipper Rahul Dravid and his men will be playing in their own den and the conditions too would suit them, but relying on external factors would certainly not be enough to see them through against the formidable Mumbai outfit.

The visitors’ all-round strength makes them the favourites going into the match at the Sawai Mansingh Stadium.

Both Rajasthan and Mumbai have six points each from four outings having won three matches respectively, but the visitors have a better net run rate of +1.150, which have placed them at the top of the table.

While Rajasthan, with a net rate of +O.230, are placed at the third position.

Happy with the “underdogs” tag, Rajasthan know it well that the visitors, despite having big stars in their ranks, have never been able to convert the early promise into a title win.

They finished runners-up once, losing to Chennai Super Kings in the final 2010.

The lavish spending has ensured that Mumbai have at their disposal greats like Sachin Tendulkar and Ricky Ponting, with T20 specialists Keiron Pollard, Lasith Malinga and Rohit Sharma only adding to the outfit’s strengths.

There are others such as Glen Maxwell, Dinesh Karthik, Ambati Rayadu and Munaf Patel and they also have a good bench strength.

The visitors have been riding on Dinesh Karthik, who has plundered 224 runs with two fifties and a best score of 86 against Delhi Daredevils.

Sharma, too, is good nick and has amassed 155 runs while Pollard, like always, has excelled with both bat and ball.

Tendulkar has also shown good form but has not been able to convert his starts into big knocks.

Their bowling, with Malinga joining the squad, wears a lethal look.

Mitchell Johnson, Pragyan Ojha, Harbhajan Singh and Pollard give them the variety and the options for any surface.

The fact that they had thrashed Rajasthan Royals here in the previous edition by 10 wickets would also give them added confidence.

Barring last edition’s drubbing, the hosts, champions in the first edition, have always stood up to Mumbai’s challenge, beating them in four out of six meetings.

Rajasthan are happy that Dravid, with two half centuries under his belt is looking as solid as ever, with Ajinkya Rahane proving to be the perfect foil.

Shane Watson, who missed a couple of matches early on, looked in good nick against Kings XI Punjab, giving the side options. Brad Hodge and Kevin Cooper have also played their roles well.

But despite playing in front of the home crowd on a familiar track, Rajasthan will have to raise the bar to match the might of Mumbai.

The wicket has assisted the seamers as well as the spinners and batting has not been that easy, and it is expected to make the contest even more interesting.