Srinivasan defended himself and said that he had consulted Sharad Pawar before buying CSK.

The Indian Premier League (IPL) 2013 spot-fixing and betting hearing in the Supreme Court has been adjourned till Monday, December 8, 2014. Times Now reported that N Srinivasan defended himself and said that he had consulted Sharad Pawar before going in to buy the IPL franchise.

Earlier, International Cricket Council (ICC) chief N Srinivasan says he had asked then-BCCI president Pawar before bidding for Chennai Super Kings (CSK). Earlier, the Supreme Court had observed that members of India Cements could not contest in the BCCI elections, which essentially prevents Srinvasan from returning to a position in the BCCI. The Supreme Court has said that IPL franchise CSK must be disqualified. 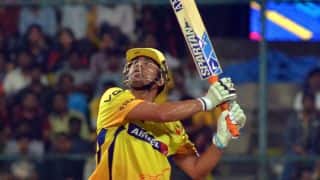 N Srinivasan: Why should I ask MS Dhoni to resign