Questions are being raised over the clean chit the two-member probe panel has given to Board of Control for Cricket in India (BCCI) Chief N Srinivasan's son-in-law Gurunath Meiyappan and Rajasthan Royals' co-owner Raj Kundra in the Indian Premier League (IPL) spot-fixing controversy. 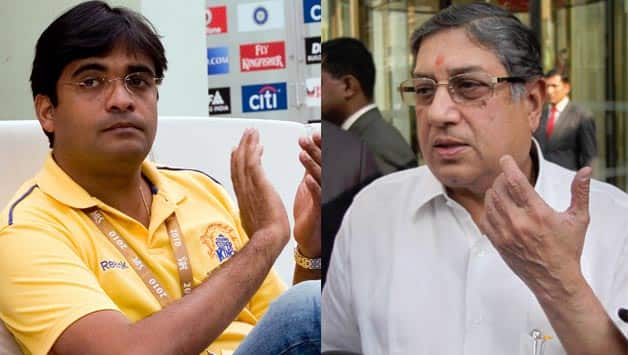 Gurunath Meiyappan (left) was given a clean chit by the BCCI’s probe panel relating to his involvement in the IPL 2013 spot-fixing controversy. The report could also mean N Srinivasan could return as BCCI president © IANS

Questions are being raised over the clean chit the two-member probe panel has given to Board of Control for Cricket in India (BCCI) Chief N Srinivasan‘s son-in-law Gurunath Meiyappan and Rajasthan Royals’ co-owner Raj Kundra in the Indian Premier League (IPL) spot-fixing controversy.

The exoneration could pave way for Srinivasan to move back to the main fold of the BCCI but a section of the members feel his future could depend on whether any member openly challenges the report of the two-member probe body.

Though most members are likely to remain silent, the likes of former BCCI Chief Inderjit Singh Bindra coming out in the open to oppose the probe body report cannot be ruled out. Matters may even head to the law courts if a Public Interest Litigation is filed, watchers of the game say.

Bindra earlier had pointed out to BCCI Interim President Jagmohan Dalmiya that retired judges R Balasubranian and Jayaram T Chouta, constituting the inquiry panel, were not fit for the job since they are close to P Raman, who is the lawyer for Meiyappan, Chennai Super Kings (CSK) team principal. CSK are owned by the Srinivasan-headed India Cements.

The committee report said Maiyappan’s arrest for betting had no bearing on the involvement of India Cements — and correspondingly — its managing director Srinivasan, and there was no evidence of any CSK money being used for betting by its principal.

However, cricketing circles said if Srinivasan — who stepped aside in June during the pendency of the BCCI probe — makes a comeback at this stage, the board could face a tremendous loss of face if the ongoing Mumbai police inquiry came up with more damaging revelations or even if it was proved later that his son-in-law was involved in betting.

They opine that the BCCI bosses should wait till the Mumbai police filed charge sheet into the case.

A knowledgeable source told IANS that the report regretted the “lack of cooperation” from Mumbai police, who arrested Meiyappan for betting in May, in sharing their findings with the committee. In the given situation, the former judges had to rely on information available in the public domain, including media reports and social media like Twitter.

Insiders say the Mumbai police bluntly asked the committee under which legal provision it was seeking cooperation, to which the board could not give any proper response. Besides, the board did not have any evidence of its own.

But in another twist, Mumbai police sources have claimed that they had asked for details of the exact information needed by the committee, which they never got.

It may be mentioned that the very composition of the probe panel came under the scanner soon after it was formed.

The probe panel also cleared IPL franchisee Rajasthan Royals and its co-owner Kundra of any wrongdoing.

Kundra faced grilling from the police and the BCCI later suspended him from all cricketing activities pending probe on the basis of Delhi police claims that he placed bets in the IPL.

The committee submitted its report on Sunday, and BCCI’s Interim Chief Dalmiya said it has been forwarded to the IPL governing council which will meet in New Delhi on August 2 to take a final decision on the matter.

The spot-fixing controversy that rocked the IPL came to light after Rajasthan Royals cricketers S Sreesanth, Ajit Chandila and Ankeet Chavan were arrested on spot-fixing charges on May 16 from Mumbai by the Delhi police.

Srinivasan was dragged into the controversy after Meiyappan was arrested by the Mumbai police. Srinivasan later stepped aside as the BCCI president and Dalmiya took over in the interim pending investigation.

Champions League T20 2013: Decision on Raj Kundra's presence to be taken after August 2