The Supreme Court has come down hard on Srinivasan and the BCCI.

On a day when the sports world was mourning the tragic death of young Australian cricketer Phillip Joel Hughes, struck by a bouncer, India’s apex court told the country’s cricket chiefs not to be the pall-bearers of the game in India. If Hughes’s death is a scar upon a lot of minds, what happened in the Indian Supreme Court is a blot on cricket itself as it became clear that the world’s richest board is becoming rancid from within. The two happenings have left cricket in a sad state.

Even as the legal eagles are debating the import of the scathing observations made by the two-judge Supreme Court bench hearing the 2013 Indian Premier League (IPL) corruption case, the senior Indian cricket board members are preparing for life after N Srinivasan, the man who ruled the board with an iron fist. Normally, observations by judges are in the nature of queries and surmises in given circumstances, but they sometimes provide an insight into their thinking.

Every observation of the judges in this case is widely interpreted as a severe indictment of Srinivasan and his dispensation. Some experts on television channels screamed as if the judgment was pronounced and Srinivasan is going. Some clearly went baying for his blood and some others perceived the proceedings in the court as calamitous for the game of cricket.

The judges asked Srinivasan some searching questions for which he may find it difficult to give convincing answers. Not that these questions suddenly popped up, the media has been pointing out these issues ad nauseam, only to be brazened out by the board and the IPL Governing Council. When the Supreme Court asks questions that the media has been raising all along, the wrongdoers take it seriously and answer carefully, if not truthfully, with sworn affidavits in some cases.

It would be interesting to see if the judges take all their observations to the logical conclusion as some opinion-makers feel. If they do, then the IPL will be reduced by two teams — two of the better performing sides in the last season — and Srinivasan will be barred from continuing as board chief.

Ideally, the guilty officials of both IPL franchises — Chennai Super Kings and Rajasthan Royals — should be punished, not the team, unless it is proved that the players are in cahoots with the management in tanking matches. Else, the managements must be forced to sell the teams to some cricket-loving franchisees so that the players do not suffer. The court asked certain inconvenient questions about people on the payroll of Srinivasan’s company, India Cements, working for the board. This has been a tradition with key board officials. In the past the board presidents, secretaries and treasurers used their personal staff and in some cases the board paid their salaries.

Srinivasan appears to have underestimated his opponents, particularly Lalit Modi, who now gleefully says that he is behind the campaign and the court cases against the exiled chief. The other suspect, former board chief Ashwin Muthiah, however, flatly denied having any hand in it or meeting the petitioner, though his explanation why he himself had withdrawn the conflict of interest case against Srinivasan was not convincing.

Srinivasan and the cricket board’s lawyers on Monday have the opportunity to make one last-ditch effort to bail their client out before the court pronounces its judgment. One thing is clear, that the Apex Court does not trust the board to act against the erring teams managements. The judges, therefore, want the Justice Mudgal Committee to decide on the quantum of punishment for all those named by it.

The board members are so beholden to Srinivasan for all the benevolence he has showered on them that they are not openly revolting against him — but the undercurrent is there. Most of them know they have to go by the political clout their leaders enjoy. The big-wigs have jumped into the wrangle. The man who can take control of the board with minimal opposition is Sharad Pawar and he is expected to keep the seat warm for Bharatiya Janata Party (BJP) chief and president of the Gujarat Cricket Association (GCA) Amit Shah to take over in two years when he will be eligible after getting elected as vice president in the next Annual General Meeting (AGM).

A clear indication of his intention came in the form of the time Shah spent watching the last one-dayer against Sri Lanka at Ranchi and the constant focusing of cameras on him. The board rules stipulate that anyone who attends two AGMs or is vice president for two years is eligible to contest for any board post. But will he be saddled with the board work when his party at the centre will be preparing for the next general elections in 2019? How will Pawar get into the equation? A common friend of the former board and ICC president and the two top bosses of the BJP are trying to bring the three together.

Arun Jaitley is another candidate, but will he get permission from the party bosses to add additional work to an already heavily loaded finance and information and broadcasting portfolios? Then he has his health issues. Jaitley apparently doesn’t mind a flexible Congressman, Rajeev Shukla, as interim arrangement, but this is a long shot.

Then, there is the eternal optimist Jagmohan Dalmiya, who seems to be Srinivasan’s preference, but age and health are not on his side. There are some takers for another former president Shashank Manohar, who maintained a clean image till he sullied it somewhat joining hands with Srinivasan to get rid of Lalit Modi, the man who rode roughshod over board members as chairman and commissioner of the IPL. Manohar could only be Pawar’s candidate in case the latter decides against another stint. Even Jaitley, who is opposed to Pawar taking over, may not mind the lawyer from Nagpur.

Still, most board members are not willing to write Srinivasan off in a hurry. They think the court has already dropped a hint for him to make a choice between his IPL team and the board chief’s post. If seriously pursued, he will prefer to be in the board and be willing to sell his team since he is already the chairman of the International Cricket Council (ICC). 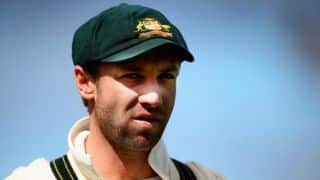