Aditya Verma, the petitioner in the Indian Premier League (IPL) 2013 spot-fixing case in the Supreme Court, has said that if an owner of a franchise is involved in betting, it is match-fixing. Verma spoke to the media after the Supreme Court hearing on Monday, where the Apex authority came down hard on the Board of Control for Cricket in India (BCCI), asking them to deal with the conflict of interest issue.

Verma said, “If team’s owner is betting on a team, it is not betting but match-fixing. If a team owner bets on his own team, then I will call this match-fixing.” Lalit Modi, the former IPL commissioner, also said that if the owners are guilty, then the Chennai Super Kings and the Rajasthan Royals should be terminated from the IPL.

Verma also said that it was a shame that N Srinivasan was still pushing to be the chief of the BCCI. He said, “If Srinivasan wants to become the BCCI chief, then it is a shame. Srinivasan is protecting the guilty, which is why this hearing is being help. Tomorrow, when the final judgement is passed, it will be a landmark judgment and important for the game of cricket. When Sachin and Ganguly walk out to bat, people worship gods. My own father died while watching cricket. When Individual 2 and Individual 3 are revealed, Srinivasan’s guilt will be revealed.”

The Supreme Court has adjourned till Tuesday afternoon, where it is expected to present its observations. 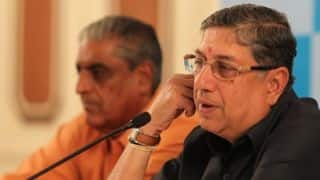