Modi also objected to the inclusion of Ravi Shastri in the three-member BCCI panel.

Former Indian Premier League (IPL) Commissioner Lalit Modi opposed the three-member committee suggested by the Board of Control for Cricket in India (BCCI) to the Supreme Court to probe the IPL spot-fixing and betting scandal and demanded an inquiry by the CBI.

“There should be no compromise on new panel. Current proposed panel has Srini cronies on it. Supreme Court should allow Cbi 2 only do enquiry,” Modi said in a series of tweets. (sic)

“Ravi Shastri completely bias and on bcci pay roll. Cbi must do enquiry. It will end all bias,” said Modi. (sic)

He said he was surprised that Justice Mukul Mudgal’s name was not there in the panel. “All names proposed by Srini are names that all should be ignored. Justice Mudgal investigated the first — surprised his name not there. The mere fact that there is so much friction on who to appoint as enquiry commission by Srini Camp shows clearly that they have something to hide,” Modi said.

“Secondly it shows they have vested interest in which way the enquiry goes. Third it shows this is how they have always operated,” Modi tweeted. 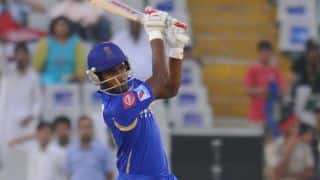