Umesh Yadav ranked his performance in the 18th over against Pune Warriors in the ongoing Indian Premier League among his "top-three" in the shortest format of the game. 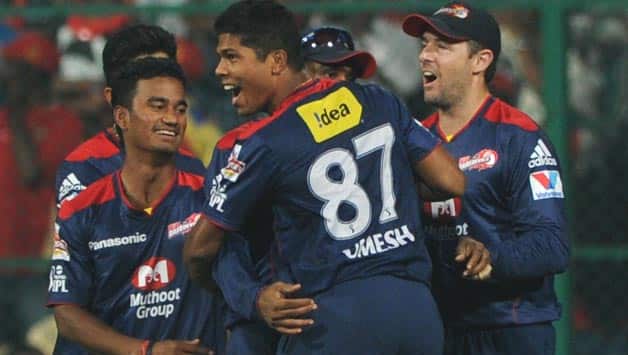 Umesh Yadav ranked his performance in the 18th over against Pune Warriors India in the ongoing Indian Premier League among his “top-three” in the shortest format of the game.

He also revealed about the kind of planning that had gone into bowling that particular over.

“There have been some good performances, but this will obviously rank among my top three in this format. Yuvi paaji [Yuvraj Singh] and Luke [Wright] were batting very well and it’s always more satisfying to get both set batsmen out. I have put in a lot of thought while bowling that over and it came out well in the end,” Umesh, who conceded only two runs in that crucial over against Pune, told PTI today.

Asked about the kind of plan that he executed, Umesh explained, “I bowled a couple yorkers and then got Luke with a slower one. I had it in mind that side boundaries are really long and if I bowl a bouncer, it will need a really powerful pull-shot to clear the ropes. Yuvraj played the pull shot and was caught at the boundary line. I must admit, had it been any other ground, it was a six.”

David Warner termed Umesh’s bowling at the death as sensational. Asked about the compliments, the pacer answered, “The special part about this team is bonding among the players. Just like Warner said that I was sensational, even his full-stretched dive at the boundary line off my bowling was brilliant.”

For Umesh, a good performance becomes even more special when the team starts winning.

“Winning is what matters in the end. If my performance helps the team’s cause, it makes me proud and happy. When I was about to bowl that over, Mahela told me, ‘Just bowl what you think is perfect. You decide and don’t have to take anyone’s advice.’ That boosted my confidence.”

The 25-year-old has taken 11 wickets in nine IPL matches this season and is happy with his form after coming back from injury.

“It always takes two to three matches to assess how your body is responding to the rigours of competitive cricket. I can confidently say that my rhythm has been good and I can feel that. I am being able to bowl the deliveries that I want to bowl and it is only possible when you hit a good rhythm,” Umesh said.

“The pitch offers good bounce and there is some lateral movement available. I enjoyed bowling on this strip,” Umesh said.

The Daredevils’ campaign has been marred by shoddy batting but Umesh defended the batsmen.

“There is no point in playing blame games. If they can bat badly, we can also bowl badly. It’s not about who does well, it’s all about the team doing well.”

Lalit Modi case: Disciplinary Committee to give recommendations to BCCI in May