Having struck some form in the past couple of matches, Kings XI Punjab now face the daunting task of taking on table-toppers and strong title contenders Mumbai Indians at Dharamsala on Saturday in a bid to keep their playoff hopes alive in the ongoing Indian Premier League.

Punjab won by 50 runs
Man of the Match: Azhar Mahmood Having struck some form in the past couple of matches, Kings XI Punjab now face the daunting task of taking on table-toppers and strong title contenders Mumbai Indians at Dharamsala on Saturday in a bid to keep their playoff hopes alive in the ongoing Indian Premier League.

Mumbai are already through to the playoffs along with Chennai Super Kings and the Rajasthan Royals. The fourth spot is still up for grabs and the teams in contention for that are Punjab, Royal Challengers Bangalore and Sunrisers Hyderabad.

Among the three, Punjab have the weakest chance of making it because they have 14 points from 15 matches against the 16 that RCB and Hyderabad have respectively.

For Punjab to qualify, they would have to hope for favourable results elsewhere but the most important task at first would be to win Saturday’s match against an on-a-roll Mumbai.

And that seems easier said than done given that Rohit Sharma’s men are coming into the game with eight back-to-back home wins this season.

Punjab, on the other hand, have gained some confidence after beating the mighty Royal Challengers Bangalore in their previous match after getting the better of a miserably out of form Delhi Daredevils.

Punjab, an erratic side led by Australian wicket-keeping legend Adam Gilchrist, has been enduring a roller-coaster campaign and it would be quite a surprise to see it make the playoff stage.

But in a positive development for them, Gilchrist got some runs under his belt against Delhi last night after being off-colour for most of the tournament.

If the destructive stumper manages to strike good form in the ongoing do-or-die phase, his indifferent run would be all but forgotten.

In fact, after being rather brittle for most of the tournament, Punjab’s batting is finally falling in place with Shaun Marsh and David Miller emerging as crucial cogs in their past couple of wins.

On the bowling front, pacer Praveen Kumar was exceptionally economical against Delhi while Sandeep Sharma stood out with a three-wicket haul.

But senior pacer Azhar Mahmood and spinner Piyush Chawala leaked quite a few runs against an off-colour Delhi line-up, even though the latter made up for it by picking up two wickets.

Mumbai, meanwhile, don’t seem to be putting a foot wrong in a smooth campaign. They turned their home ground into an impregnable fortress and even from Wankhede, they would start outright favourites against Punjab on Saturday.

Their batting has been a mix of aggression and patience with the likes of Dinesh Karthik, Kieron Pollard and skipper Sharma in decent form.

Add to this, they have finally started including their ‘million-dollar buy’ Glenn Maxwell in the line-up and he has got good starts in the opening slot.

Their bowlers too have been upto the task. Mitchell Johnson has led the pace attack with elan and has got good support from Sri Lankan slinger Lasith Malinga.

Senior off-spinner Harbhajan Singh has also made useful contributions to make the side close to invincible going by current form.

Manna from Heaven: Tainted cricketers around the world can now ply their trade fearlessly! 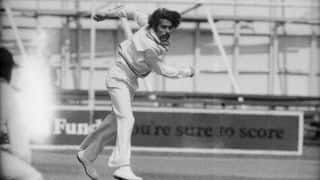 Bhagwat Chandrasekhar: The man who turned his disability into a lethal weapon