Struggling Pune Warriors got a big boost as Yuvraj Singh, who is recovering from a back injury, is likely to play against Kings XI Punjab, said batsman Aaron Finch. 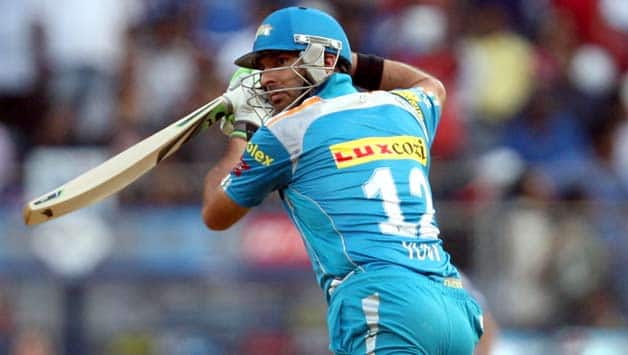 Struggling Pune Warriors got a big boost as Yuvraj Singh, who is recovering from a back injury, is likely to play against Kings XI Punjab, said batsman Aaron Finch.

“I think Yuvi (Yuvraj) should be fine. He has been training for the last couple of days and his back seems to be improving. We are very hopeful that he will play. He brings lot of experience into the side. Obviously, his ability in this format of the game is second to none. So it will be great to have him back,” said Pune’s 26-year-old Australian import, Finch on the eve of the crucial match.

“Unfortunately, not having Yuvi in couple of games did hurt us because he brings so much experience and composure to that middle order.

“I think he can really guide the team home. He is someone who has a big influence on the team. To have him in the side tomorrow will be very crucial and something that we need,” he said.

The Warriors are languishing at the eighth position in the nine-team competition and badly need a win to boost their play-off chances.

Asked about Pune’s four loses out of six games, Finch said, “We have got some very talented batsmen and some good all-rounders in Mitchell Marsh, Angelo (Mathews) and Abhishek Nayar. It (team performance) is something that has to be addressed.”

Finch said the loss against Sunrisers Hyderabad from a winning position in their last match is still hurting the team.

“It was obviously a very hard defeat to take. We probably lost from a winning position. We recognise that and after that match we had a very constructive team meeting. There is nothing we can do to change the result, but the guys have learnt from it. I think that’s the real positive we can take into our next match,” he said.

Asked if the team was going to make any changes ahead of tomorrow’s match, Finch said, “I am not sure yet. I think there will definitely be changes. When you have a loss like that (against Hyderabad) people do have to be accountable. It’s never easy coming in after a loss like that”

“I think when you are in a position like that and you lose, it’s fair enough for the owners and the coach and the coaching staff to ask some questions.

“We still have 10 games to go and we need a good run. We have had two good wins against Chennai and Rajasthan Royals and that builds a lot of confidence in the team. When you beat superstar teams like Chennai in Chennai, which is never easy to do, I think the guys can take a lot of belief out of that.” PTI SUN SSC