Yuvraj Singh was released to ensure that the purse of other teams' are exhausted.

Bengaluru: Royal Challengers Bangalore director P A Murali today said the strategy behind releasing Yuvraj Singh was to ensure that the purse of other teams’ are exhausted which would help them get better cricketers for Indian Premier League (IPL) season 8.

“The basic strategy to leave Yuvraj was to ensure that the purse of other teams are also defeated so that you are able to get better players while going forward,” he told reporters here at the IPL-8 auction here. However, Murali said the team would have liked to have Yuvraj back in the squad but unfortunately it did not materialise. Full list of players bought by Royal Challengers Bangalore

“We would have liked to have him back in the team, but unfortunately it was not to be,” he added. All-rounder Yuvraj became Indian Premier League’s costliest ever buy as he fetched a whopping Rs 16 crore from Delhi Daredevils. Preity Zinta, co-owner of Kings XI Punjab, also expressed her team’s desire to have Yuvraj in the side.

“When we started he was with us. It is just not me, but the team is very fond of him. Now he is such a big player, it is very difficult to buy him. So, we tried – and the price he went for was amazing and we will always want him,” he said.

However, the team management wanted Murali Vijay in the side, Preity said. Replying to a query, RCB director Murali said since the captain and the coach were not around, they had to call Virat Kohli and Ray Jennings to keep them informed about what they are doing.

“We did not have the coach and the captain with us, so it is important both the captain and the coach should be aligned with what we do,” he added. Chennai Super Kings Coach Stephen Fleming expressed his happiness to get back Mike Hussey into the side as he would boast the batting up the order.

“It is good. He is obviously covered for our batting. He was a key component of our side for so long. I don’t think he is done yet. He has some energy left in his legs, and we are happy to have him back in the side,” he added. 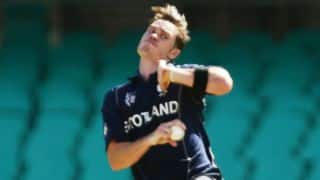