Kings XI Punjab pacer, Anureet Singh said he knew he was the bowler the batsmen would go after.

Kings XI Punjab (KXIP) lost their opening game of Indian Premier League (IPL) to Rajasthan Royals (RR)  yesterday but their bowlers had done their job for most part of the game. Anureet Singh had a good outing and in an interview to iplt20.com, he said he knew he was the bowler the batsmen would go after.

On asked about the game he said,”Obviously it was. This was the start of the season and one expects to get off to a good start and we too wanted that. We were playing here (in Pune) for the first time as a home ground and we didn’t have an idea of the wicket that much. But we still did alright; we bowled well, we lacked a bit in the batting, but we have the confidence to do well in the coming games.” James Faulkner takes Rajasthan Royals (RR) to 162/7 vs Kings XI Punjab (KXIP)

His wicket of Rahane was crucial for KXIP to start well. He said, “It is often said about me that I bowl the inswingers well, but I also try to bowl the away going delivery to a right-handed batsman. I have practiced that and now I am confident that I can work the ball both ways. I had an idea that he would try and attack me a bit because I am playing against him for the first time. So I stuck to my basics and I got him out.”

He also came back to dismiss Deepak Hooda who was going great guns. On asked what was his plan for it, he said, “I was to bowl according to a plan but it didn’t go my way at first. I was to bowl yorkers but the ball swung away a bit. So it came within his (striking) range and he hit me. But I have been practicing the yorker and that helped me and I could get him out (bowled).” Rajasthan Royals (RR) trump Kings XI Punjab (KXIP) by 26 runs in IPL 2015 match 3

Bowling the final over of an innings is never easy but Anureet seemed to have things under control despite bowling to James Faulkner who was hitting them big. “My plan was to stick to my basics and the things that I have practiced. I wasn’t thinking that it is Faulkner who is batting. If I had focused on that then I too would have been under pressure. He is a batsman, who has come here to play and we are all playing the game at the same level. Of course, he is a very good player who has been performing well and has proven himself. But I stuck to my basics and that got me the wicket, ” he added. George Bailey feels making changes in batting order costs Kings XI Punjab the game against Rajasthan Royals

When he was asked about how does he approaches the bowling he said, “What I mean is if I am bowling in the death overs then I have practiced bowling round the wicket. I don’t try two-three things at the same time. In death overs (the idea is to) try and bowl your best ball, what you have practiced. If it is his day, it can so happen that the batsman might hit you even then. But if your basics are strong and if you bowl your best ball, then you are less likely to get hit.”

On the loss he concluded by saying, “We would focus on the areas that we lacked here today. We would have to bat better and while bowling too. This wasn’t a wicket for 160 odd runs. We should have restricted them to fewer runs (so that’s an area we would be working on).” IPL 2015: Mumbai Indians take on Kings XI Punjab with both teams eyeing first IPL 8 win 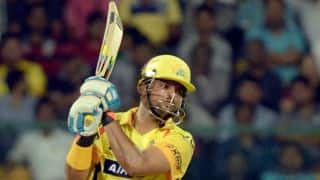