The former Australia skipper wasn't quite successful as a player for KKR and MI in IPL.

Mumbai: Mumbai Indians (MI) coach Ricky Pointing on Sunday said their first match against defending champions Kolkata Knight Riders (KKR) on April 8 will be a big challenge for his team.

“We have got a big challenge ahead against Kolkata on Wednesday. They are the defending champions and are playing at home,” Ponting said at the team’s pre-season press conference here.

The 40-year-old said the preparations have been good for the team and the attitude of the players has been spot on.

“These few days the preparations have been great and I loved the attitude of the players, it has been spot on. Players have worked hard at the training session,” he said.

The former Australia skipper wasn’t quite successful as a player for KKR and MI in IPL.

When asked how big a challenge is this to coach a team in a Twenty20 format, he said, “I have been involved in this format for quite a long time. Last couple of years I have been commentating in T20 cricket back in Australia.”

“I am understanding how the game is played. Understanding more and more of the tactical side of the game. I will make sure my players are 100 percent prepared.”

With on-field verbal spats being a part and parcel of IPL over the years, the former Australia World Cup-winning captain said it’s a part of the game but players shouldn’t cross the line.

“It’s a part of the game. But players do have to understand where the line is and not cross it,” Ponting said. IPL 2015: Copyright notice to organisers for music during opening ceremony 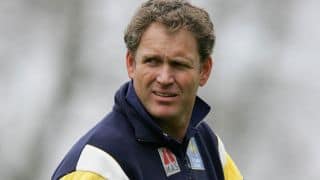