Bollywood stars Farhan Akhtar, Shahid Kapoor, Anushka Sharma, Pritam and Hrithik Roshan are among the performers at the opening ceremony, which returns to Kolkata after two years; the opening ceremony of the 2013 edition was also held at the same venue. Earlier, the organisers of the ceremony as well as the West Bengal government entered into a dispute with the Indian Performing Right Society Ltd. (IPRS) due the non-payment of royalty over the usage of music for the event. The dispute was eventually settled between the two parties.  Read: Copyright to organisers for music for opening ceremony

The opening game of the IPL is scheduled to take place between Kolkata Knight Riders (KKR) and Mumbai Indians (MI) at the Eden Gardens in Kolkata on April 8. KKR will defend the title, which they won for the second time after defeating Kings XI Punjab (KXIP) in the final of the 2014 edition. READ: KKR vs MI IPL 2015 Match 1 Preview 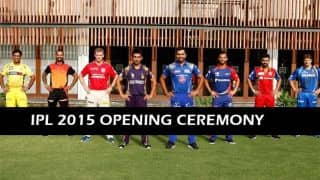