Harbhajan first sent back the well-set Raina for 25 by deceiving the left-hander.

Fleming said the target of 188 looked achievable till Harbhajan got the two big wickets of Suresh Raina and skipper Mahendra Singh Dhoni.

“We were going okay [during the run-chase], but the game changed with those two balls from Harbhajan. Things become difficult if you lose wickets in clumps during a big run chase. We did that today ? losing two big players, key players – Raina and Dhoni. So that was the turning point and yes, 20 [odd] runs was the right differential between the teams today,” Fleming said at the Wankhede Stadium. Kieron Pollard believes MI played perfect cricket against CSK

Harbhajan first sent back the well-set Raina for 25 by deceiving the left-hander and accepting an easy return catch and then brought the capacity crowd on its feet by trapping Dhoni leg before off the next ball to finish with superb figures of 2 for 26.

The victory also piloted MI into the May 24 final and left Super Kings with the more difficult task of winning an additional game, Qualifier 2, at Ranchi on May 22, to get another shot at their rivals in the title-clash in Kolkata.

Fleming referred to the opening stand of 90 by MI’s Lendl Simmons (65) and Parthiv Patel (35) as one of the reasons for his team’s defeat. MS Dhoni fined for inappropriate public comment

“It was a tough loss, tough game. Mumbai are a difficult team to play at home. We identified that. They played very well. I thought we created some opportunities that did not go our way. The first six overs were pretty close. We needed to get a couple of early wickets. But they got away with that opening partnership. I think we did pretty well to restrict them to 187 which was a par score.”

“180-plus was okay. At one stage they looked like getting into the 200s. I think we did very well. With some ounce of luck we could have got a couple of wickets in the first six. Updates: Chennai Super Kings vs Mumbai Indians, Qualifier 2

That would have changed the complexion of the game. I think the guys did well to hang in there.

“They have got some big hitters, Pollard, obviously, can clear the boundary with ease. It was those sixes which kept them going in between. I thought the bowling was pretty good.”

Fleming defended Faf du Plessis coming in at no. 3 instead of Raina as part of a strategy to keep the Indian left-hander and Dhoni together.”It’s been something through this series that we needed an innings of substance with Suresh batting with MS during the middle [overs]. It’s something that’s been strong for us and captain was very strong on getting that combination going. Scorecard: Chennai Super Kings vs Mumbai Indians, Qualifier 1

“Also Faf’s ability to hit sixes in the first six was something we were interested in and it worked well in the last game and it was a continuation of that,” he explained.

He, however, refused to comment on the dubious leg before decision that sent back Super Kings’ in-form opener Dwayne Smith in the very first over of the run-chase. He termed the defeat disappointing for his tired lot of players and banked on their next game to bounce back.

“We thought winning today’s game does give you a big advantage. The guys are getting pretty tired at this stage of the tournament. So, to get rid of a game and a bit of travel would have been good. We are not afforded that luxury and Mumbai will tune up for that final in pretty good shape and we have to dig pretty deep. Dwayne Bravo completes 100 wickets in IPL

“Obviously I am disappointed not to win here, but [at the same time] I am happy we have another opportunity. It still wasn’t one of our better games and we have a chance to rectify that in Ranchi which has been good to us. It is the skipper’s home town, obviously, and it’s an opportunity we relish. We are pleased for that but disappointed we have to do it the long way. 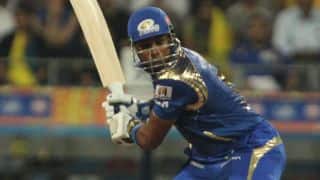 I believe there is no problem with my discipline or attitude: Umar Akmal