Needing 18 off the last over after the mini blitz by Morris, Bhuvaneshwar Kumar stopped the Royals' charge.

Mumbai: Notwithstanding Rajasthan Royals making a match out of the 202-run chase, Sunrisers Hyderabad chief coach Tom Moody said that his team had things under their control through the course of the IPL cricket encounter. Chasing the mammoth target, SRH feel short by 7 runs after the David Warner-led side ended its innings on 194/7.

“I thought we had control of the game throughout barring a slight wobble in that second last over. We had faith in our attack to defend the score,” said Moody after his team’s fifth win in 10 matches. Steven Smith says Rajasthan Royals’ bowlers, fielders let them down against Sunriers Hyderabad

“Obviously when 40 runs are required off the last two overs, you feel confident but then the first three balls went for six and there was some pressure. We took the pedal off a bit. But finally we achieved what we came here for a win,” said Moody referring to Chris Morris clubbing Praveen Kumar for three successive sixes in the 18th over of the innings. SRH vs RR, IPL 2015 Highlights: Shikhar Dhawan’s fifty, Eoin Morgan’s blitz and more

Needing 18 off the last over after the mini blitz by Morris, Bhuvaneshwar Kumar stopped the Royals’ charge. “We had been bowling well throughout except the game against Kolkata (Knight Riders) the other day. Bhuvi’s bowling at the beginning and end, when he executed those Yorkers, was top class,” said Moody in praise of the Indian swing bowler who took 3 for 44 from 4 overs.

“We had been slightly deficient in middle-order and felt we needed a strengthened middle-order. We replaced an international bowler with an international bowler. We got 200 which was an excellent score in these conditions,” he said when defending the changes in the eleven that saw Ravi Bopara and Ishant Sharma coming into the side in place of Dayle Steyn and Bipul Sharma.

Moody praised Eoin Morgan and said he was expecting a big innings from the Irish-born England batsman, who batted splendidly in making 63 off just 28 balls.

“He batted exceptionally well. He’s a dangerous player in the middle of the innings. He showed tonight how effective he can be. This innings was always in the making. I am pleased with him. It’s great for our side. He got the opportunity to express himself and bat as well as he did in this situation but more importantly in a crunch game for us. His 50 was a fabulous innings.”

Moody also praised the Brabourne track on which nearly 400 runs were scored. “The wicket was excellent and the outfield was extremely quick and with the extra pace and bounce that this wicket provides, the ball is going to disappear as the margin of error is very slight. It makes for great entertaining cricket,” he concluded. 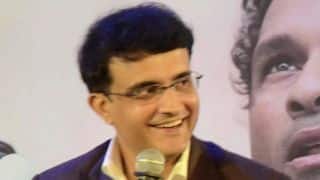