Ajinkya Rahane and Usman Khawaja have provided Rising Pune Supergiants (RPS) a steady start in their chase of Delhi Daredevils’ (DD) 162 in Indian Premier League (IPL) 2016. Jayant Yadav opened the proceedings for Daredevils. He bowled a tight first over giving just six runs. Carlos Brathwaite bowled the second over. After two dot deliveries, Khawaja hit him for a four over deep backward point off the third ball of the over. He took a single the very next ball taking pressure off him. Brathwaite hit the ball at the third man, another single followed. Khawaja then picked up another run to keep the strike. Jayant, who bowled the third over gave just three runs in it. After three overs, RPS were 16 for no loss. Live Cricket Scorecard: Delhi Daredevils vs Rising Pune Supergiants, IPL 2016, Match 33 at Delhi

The batters then tried to rotate the strike on a consistent basis. The first six of DD’s innings soon came when Khawaja hit the fifth ball of the fifth over bowled by Jayant, for maximum over long off. This took the score to 37. Mohammed Shami was then brought into the attack. Rahane hit him for a four over backward square leg and followed it up with another four towards deep midwicket. After six overs, Delhi reached 50 without any loss requiring 113 more from 84 balls.  LIVE BLOG: Live Cricket Score Delhi Daredevils (DD) vs Rising Pune Supergiants (RPS), IPL 2016 Match 33 at Delhi

Amit Mishra bowled a good seventh over giving just three runs. At the time of reporting, RPS had scored 53 runs in seven overs needing 110 more to win with all wickets intact. 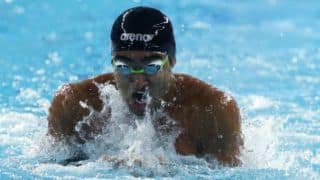